The Bachelor's new host Jesse Palmer has quietly tied the knot with model Emely Fardo, almost a year after getting engaged in Paris in 2019. 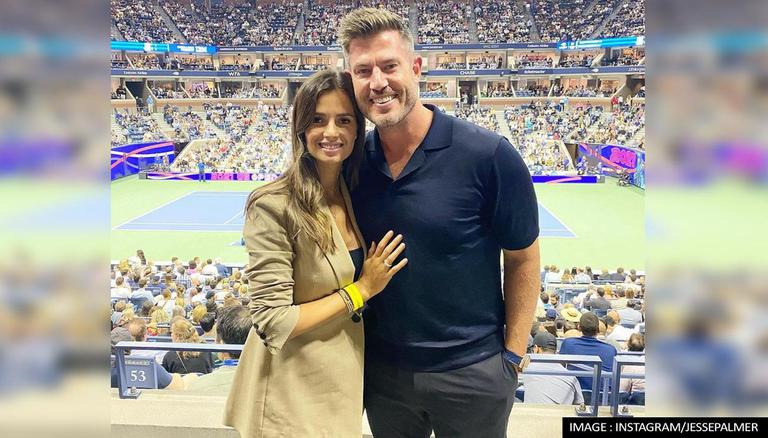 
The Bachelor's new host Jesse Palmer has tied the knot with fiance and model Emely Fardo in an intimate wedding ceremony. As per People reports, Palmer and Fardo, who got engaged during a romantic getaway to Paris in July 2019, tied the knot almost a year later on June 5, 2020. Their nuptials took place at a friend's house in Connecticut, with the duo telling the publication about how their wedding in Provence, France, got postponed and eventually cancelled due to the COVID-19 pandemic.

Taking to his Instagram handle recently, the 42-year-old uploaded adorable photos from the ceremony and mentioned that the couple feels 'grateful' and 'lucky' to have found each other. The duo, who first sparked dating rumours in 2017, hinted at their marriage in several social media posts over the last year, but never publicly announced it.

In their wedding photos, Palmer can be seen looking dapper in a blue suit with a white shirt, while Fardo looks gorgeous in an all-white, knee-length dress. For the caption, Palmer quoted the couple's statement to People and wrote," “Big or small, wedding party or not, we feel so grateful and lucky to have found each other!” the couple tells PEOPLE exclusively!". Fardo also shared his post on her Instagram stories.

They also mentioned how only a bunch of their close friends that reside in the greater N.Y.C. area, while being in quarantine could be invited for the ceremony. Recalling their 'lovely afternoon', the duo added that they were looking forward to celebrating their love with their parents and immediate families soon. Fardo constantly dropped hints about their wedding on her social media by sporting rings on her left ring finger as well as using Jesse's last name on her media profiles. She also referred to him as her 'husband' on the occasion of their one-year anniversary. "Happy anniversary to us!! I love you more than I love cheeseburgers!" she wrote in June.

READ | Chris Harrison to quit The Bachelor, makers yet to decide on a permanent host

In an earlier interview with The Daily Mail, The Bachelor's season 26 host stated that he had been enamoured with Fardo, adding that 'I'm head over heels for her'.

READ | 'The Bachelor' stars Arie Luyendyk and Lauren Burnham share first pictures of their twins
READ | Who Is the Next Bachelor 2022: Can Greg Grippo be the one? Here’s the list of contenders
READ | Jesse Palmer to host new season of 'The Bachelor': Details about the show's alum

WE RECOMMEND
Jesse Palmer to host new season of 'The Bachelor': Details about the show's alum
Elder-Lee: At 48, Westwood makes 11th Ryder Cup appearance
'The Bachelor' 2021: Chris Harrison speaks out days after stepping down as the host
The Bachelor Women Tell All spoilers: What went down in the latest episode?
Does Sarah come back on 'The Bachelor'? Find out why the contestant left mid season
Listen to the latest songs, only on JioSaavn.com