What Is The Strength Of Sam Wilson's New Suit In 'The Falcon And The Winter Soldier'? Read

The last episode of TFATWS saw Sam Wilson aka The Falcon’s debut as Captain America in a brand new suit that was brought to him from Wakanda. Read more

Source: Still from The Falcon and The Winter Soldier


The Falcon and the Winter Soldier’s season one came to an end on a high note on Friday, April 23. The last episode saw Sam Wilson aka The Falcon’s debut as Captain America in a brand new suit that was brought to him from Wakanda. The action-packed episode marked Sam sporting his new look that combines both Sam’s Falcon suit with Captain America’s outfit.

What is Sam Wilson’s costume made of?

The new hybrid suit features Sam’s spinning wings, however, this time it is larger and can act as a shield for his entire body when flared to cover him. Another change in the wings is that it consists the red, blue, and white accents similar to that of the Captain America suit. The new costume includes a silver star right in the middle along with vertical white and red stripes all over it. Keeping this aside, Sam has enough room to lodge the shield on his back without disturbing his new enormous wings. 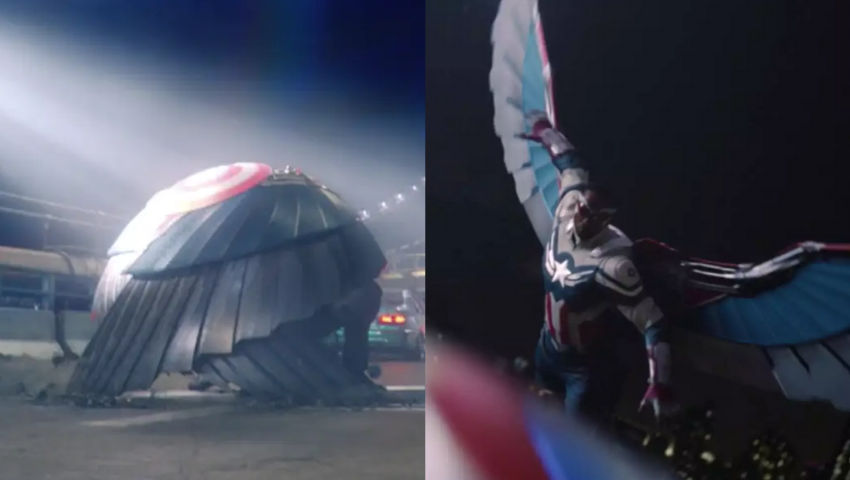 (Image Source: Still from The Falcon and The Winter Soldier)

What is the new superpower of Sam Wilson?

As shown in the episode, Sam Wilson doesn’t need a super-soldier serum in order to follow the footsteps of Captain America. The Falcon is already skilled in aerial combat and has exercised correct judgement under pressure.

READ | 'The Falcon And The Winter Soldier': What to expect from the finale episode?

From the beginning of The Falcon and the Winter Soldier, the miniseries premise concentrated on who will follow Cap’s legacy and take on the responsibility of becoming the new Captain America. For the unversed, Captain Steve Rogers (played by Chris Evans) left his position and retired after the events of Avenger: Endgame after giving his shield to Sam Wilson. When Sam noticed that John Walker has started misusing his power as the new government-appointed Cap, he finally decided to accept the title.

Once Sam was confident that he was the right person to carry the shield, Bucky Barnes, once again took favours from the Wakandans to build a brand new suit for him. This came after John, the new cap, ripped off Falcon’s wings in a previous fight. Soon after the season finale aired, there were speculations about the next instalment of The Falcon and the Winter Soldier, whether it will be a new season or a movie. Showrunner Malcolm Spellman told The Hollywood Reporter that a fourth Captain America movie is in works at Marvel Studio that will star the Falcon and the Winter Soldier in the lead.

(Promo Image Source: Still from The Falcon and the Winter Soldier)