Who is the voice of Mora in Matt Groening's Disenchantment Season 3? Know all about the Season 3 that premiered on January 15, 2021, on Netflix. 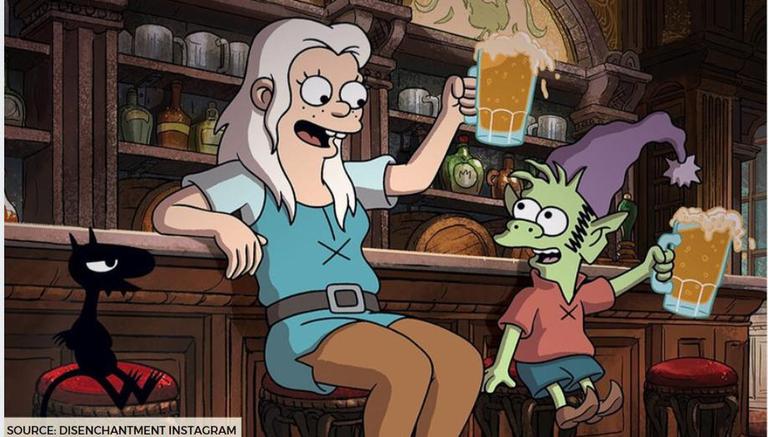 Disenchantment has returned for a third season this year. The Netflix show is a satirical animated sitcom created by celebrated cartoonist Matt Groening, who is known for his series like The Simpsons and Futurama. Disenchantment is set in the medieval fantasy kingdom called Dreamland. It follows the story of Beans who is a rebellious and alcoholic princess, her elf companion Elfo and her destructive personal demon Luci. The show also stars the voices of Abbi Jacobson, Eric Andre, Nat Faxon, John DiMaggio, Tress MacNeille, Matt Berry, David Herman, Maurice LaMarche, Lucy Montgomery, and Billy West. The series debuted in August 2018. Netflix then announced that Disenchantment will be renewed for a 20-episode second season that will be split into two parts, with the 10 episodes premiering in 2019 and the next 10 episodes premiering on January 15, 2021. Read on to know one of the favourite characters in season 3 and the name of the actor who has voiced this role.

All about Disenchantment season 3 and the voice of Mora

Disenchantment part 2 introduced us to Princess Beam's mother Dagmar (voiced by Sharon Horgan), who was later revealed to be an evil enchantress. By the end of season 2, we are also introduced to Steamland, the steampunk counterpart of Dreamland where she learns about an assassination plot planned against her father. Disenchantment part 3 series captured the relationship of Princess Beam with her father, King Zog and also touch upon the rivalry between Odval and the archdruidess attempting the coup. The excitement of the fans will build even more in Disenchantment Part 3 as Bean will continue to grow into her power and own her destiny. The fearless trio will together discover and explore new worlds in part 3 of the cartoon series.

your favorite 3 drunken misfits are back for part 3. new eps of Disenchantment are now streaming! pic.twitter.com/frx7orCBdo

Who is the voice of Mora in Disenchantment?

Meredith Hagner is the voice of Mora in Disenchantment Season 3. As reported on Distractify, Meredith Hagner who is known for the role of Portia Davenport in Search Party, Misty in Palm Springs, Montana in Younger, has voiced the mermaid character named Mora. The actress was born in New York City and is currently married to actor Wyatt Russell, the couple is expecting their first child in a few months now. The fans of the show are obsessing over the role of Mora and the romantic angle that her character brought in the new season. Fans are currently waiting for the next season of the show, as they certainly don't want the cartoon series to end just after the season 3 when the plot ended in a cliffhanger.

feeling particularly ghoulish this morning, so thought I’d toss this example of the transformative effects of hair and makeup and oh you know casual arm placement shot UP ON MaIN

so many kingdoms to visit, creatures to meet and beers to drink. part 3 is now streaming. pic.twitter.com/OcsrQMwiGN

ALSO READ| If You Loved Jasmin Bhasin's Stint In 'Naagin 4', Here Are Her Other Shows To Watch Next

The Disenchantment Season 3 series received a rating of 7.2/10 on IMDb. While a 9/10 rating on TV.com, and a 6/10 rating on the IGN website. The cartoon series also has a 94% likes received from Google users as well. Rotten Tomatoes has given the show a rating of 67%