Who Is Blackstar In Jupiter's Legacy? Here's All You Need To Know

Who is Blackstar in Jupiter's Legacy is a rising question since the superhero series has been released on Netflix. Read to know about the villain and actor. 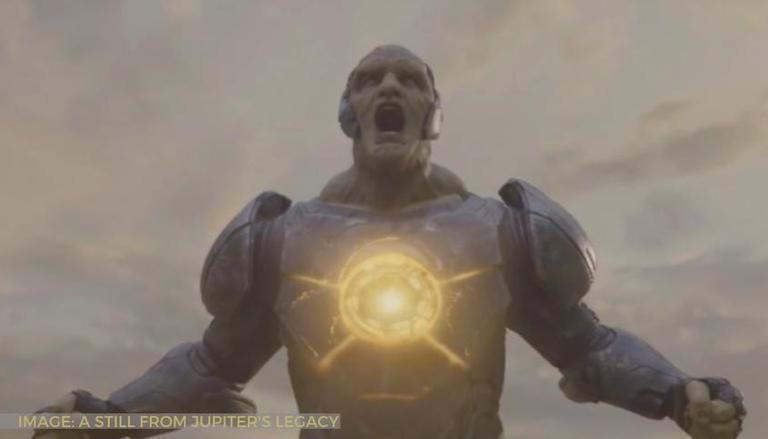 IMAGE: A STILL FROM JUPITER'S LEGACY


Jupiter's Legacy is the latest superhero series on Netflix. Developed by Steven S. DeKnight, it is based on the comic book series of the same name by Mark Millar and Frank Quitely. The first season of the show has garnered mixed responses from the viewers. Among the most talked-about characters is the series villain Blackstar.

Who is Blackstar in Jupiter's Legacy?

Blackstar is one of the major negative characters from Jupiter's Legacy comic book bought into live-action. He has an anti-matter battery built into his chest that generates an enormous amount of energy which makes him an antagonist that cannot be taken down by a single hero. A similar situation is seen in the debut episode as the group of superheroes battle Blackstar but find's it difficult to defeat him.

Blackstar has said to have eliminated an entire alien race. The Utopian (Josh Duhamel), leader of the Union superhero team, is considered the strongest hero on the globe. However, he alone cannot defeat the supervillain. It hints at how powerful he is and the threat he possesses. Even Brainwave (Ben Daniels) finds it hard to break through Blackstar's mind. His mind is described as a lock built into another lock a thousand times over. Brainwave struggles to get the right key using his unparalleled psychic power. It is only after a very long time when Brainwave manages to get in Blackstar's mind, that too, for not a long time in the series.

Blackstar's powers include superhuman speed, strength, agility, durability, stamina, sight, and flight. His anti-matter battery allows him to release waves of explosive energy. It also powers his exo-suit, strengthing his abilities. The character has vengeance against the Sampsons.

READ | 'Jupiter’s Legacy' ending explained: Here is what you need to know about the plot twist

Jupiter's Legacy has Tyler Mane portraying Blackstar. The actor is no new name to the superhero genre as he has essayed Victor Creed / Sabretooth in X-Men (2000). He has also played Ajax in the epic historical war film Troy (2004), and Michael Mayers in the remake of Halloween. Mane's acting credits include The Devil's Rejects, Gunless, Compound Fracture, Playing with Fire, Hercules, Chopper, and more.

READ | Will there be another season of 'Jupiter's Legacy'? All you need to know about the show

IMAGE: A STILL FROM JUPITER'S LEGACY

READ | How many episodes are there in Jupiter's Legacy? Know details of this superhero drama show
READ | Where was 'Jupiter's Legacy' filmed? Know all about the sci-fi series' shooting locations