Wild Dog's Review: Audiences Laud The Film, Say 'its Not A Regular Movie'

Wild Dog opens up a strong response and a lot of photos and videos from the movie have been making a buzz on the internet. Read Wild Dog's review.


The makers recently released the much-awaited drama film Wild Dog on April 02, 2021. Wild Dog stars Nagarjuna Akkineni, Kelly Dorji, Avijit Dutt, Jay Jha, Saiyami Kher, Atul Kulkarni and Dia Mirza in lead roles. Fans and followers of Nagarjuna can't keep calm as his latest release, Wild Dog, opened with strong response from viewers. A lot of photos and videos from the movie have been making a buzz on the internet as part of Wild Dog's review, and audiences are gaga about the brilliant acting skills and storyline of the movie.

Taking to their respective social media handle, audiences have gone on to give Wild Dog movie's review. The storyline and acting abilities in the film have received positive feedback. Some users commented on how much they enjoyed the film's concept, while others became enamoured with the show's characters and praised their efforts. Twitterverse also went on to trend Wild Dog movie's review using the hashtag #WildDog on the microblogging site.

Among the user's comments, one of them wrote, “Just watched #WildDog... it is fantastic FireFireFire... I really have been missing a good action flick... and I got a Hollywood style, power-packed, emotional, edge of your seat kinda action film... Just watch it Raising hands... @iamnagarjuna no one else could have pulled this off”. Another user wrote, “Watched the movie Nag Sir’s role is well etched. Songs lekapovadam huge plus Bgm superb Thriller feels last daka chala bagundi Last 15 mins Excellent and nail biting @MatineeEnt 👌🏻 #Gaganam keka #WildDog is bokka”. Check out a few more Wild Dog's review below.

READ | If you loved Nagarjuna Akkineni in 'Wild Dog', here's a list of his thriller movies

Just watched #WildDog .. it is fantastic 🔥🔥🔥... I really have been missing a good action flick .. and I got a Hollywood style ,kickass power packed, emotional, edge of your seat kinda action film .. Just watch it 🙌.. @iamnagarjuna no one else could have pulled this off 🤗🤗🤗

Users have also commented on the film’s IMDb page for Wild Dog Telugu movie's review. One of the users wrote, “Right from the opening bomb blast shot the entire movie carries the intense thrill”. Another user wrote, “Excellent direction, casting and locations. Not a regular movie. Crisp and grabs your attention”. Take a look at a few more reviews below. 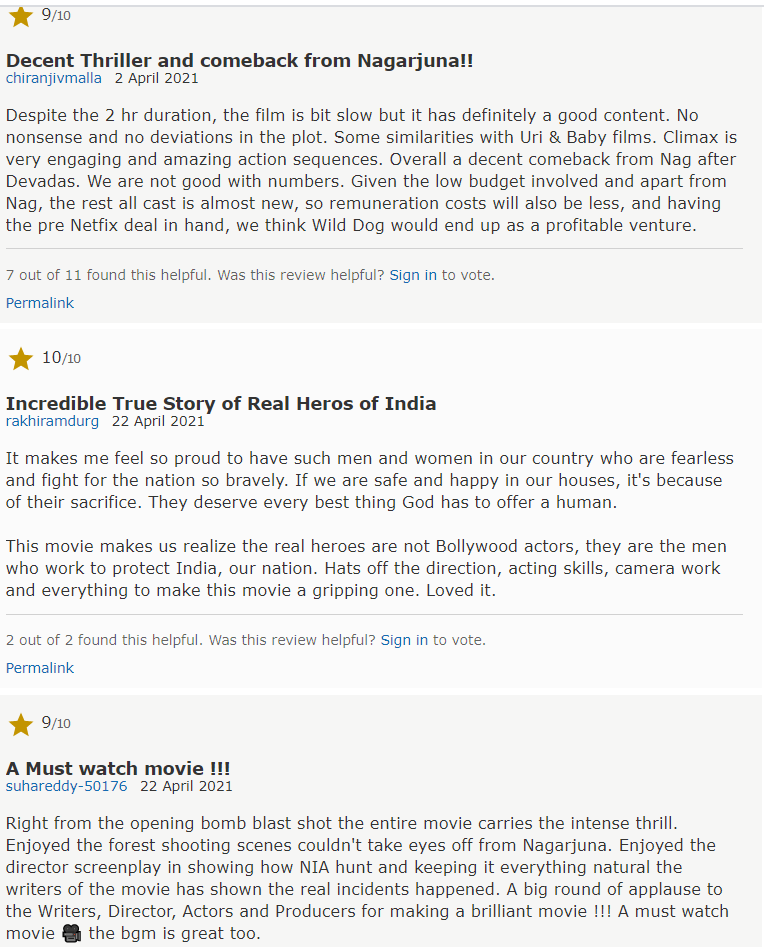 The action thriller film is available for streaming on Netflix as it released yesterday, April 22, 2021. Many real-life terrorist attacks in India are depicted in the film. The film's plot revolves around the titular character, Vijay Varma (Nagarjuna Akkineni), also known as Wild Dog, who is summoned back to investigate a bomb explosion in Pune. When Vijay identifies Khalid as the mastermind behind the explosion, he leads a covert operation to apprehend him.

READ | 'Wild Dog' OTT release, cast and other details about the Nagarjuna starrer