Korean Drama Youth of May actors Lee Do-hyun and Go Min-si are seen recreating a romantic scene from the film DDLJ. Fans go gaga over the video. 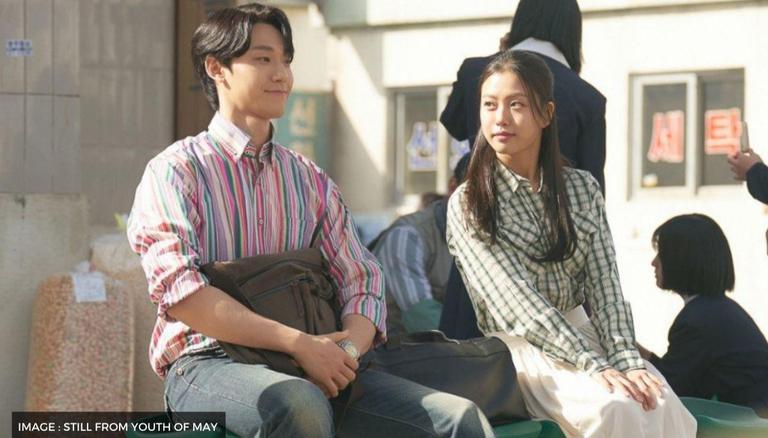 IMAGE: Still from Youth of May

Lee Do-Hyun and Go Min-si have a romantic angle in the Korean Drama show Youth of May. In Youth of May's last episode. Lee Do-Hyun who portrays the role of Hwang Hee-tae is seen saying goodbye to Go Min-si's character Kim Myeong-hee. However, after she leaves, he starts thinking in his mind that she should turn back just like the "Palat" scene in the 1995 Bollywood film Dilwale Dulhania Le Jayenge. She eventually stops and does turn back to look at him again like Kajol did in the film.

Lee Do-Hyun aka Hwang Hee-tae seemed shaken by her action and tells her that he was just thinking about her looking back at him. When Indian Korean Drama fans saw the video on social media, they immediately realised that Dilwale Dulhania Le Jayenge had a similar scene. A fan wrote that this was the Korean version of "Palat". Another wrote that this is exactly the way it is in Hindi films, when a girl looks back it means that she is definitely in love. A fan mentioned that this is also like Ileana D'Cruz's film Main Tera Hero. Take a look at the comments on the video here. More about Youth of May

Youth of May's cast also features Lee Sang-yi and Keum Sae-rok in lead roles. Actors like Kim Won-hae, Oh Man-seok, Shim Yi-young are Hwang Young-hee are seen playing pivotal roles. The show is written by Lee Kang and directed by Song Min-yeob. The plot of the show revolves around a medical student Hwang Hee-tae and a nurse Kim Myung-hee who fall in love with each other. The series is set in the 1980s during the Gwangju Uprising.

IMAGE: Still from Youth of May