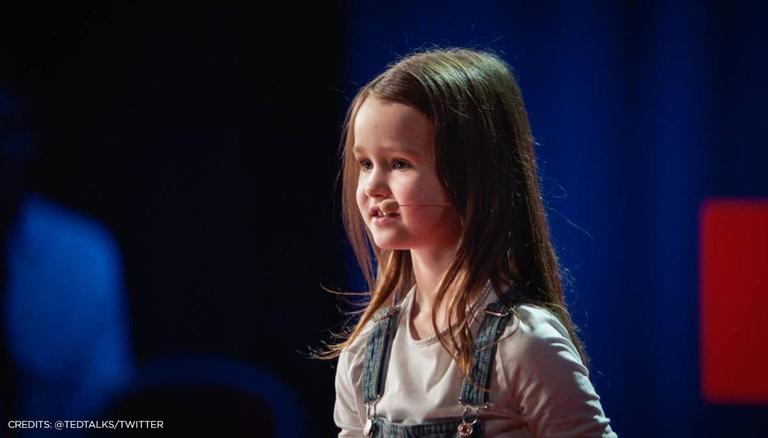 
A seven-year-old Australian girl recently became an internet sensation after delivered a TED Talk on child development and adult interaction. Molly Wright, from Queensland, became the youngest person to ever give a TED talk in which she told adults across the globe how they can do a better job, while interacting with their children. She was accompanied by her friend one-year-old Ari and his dad Amarjot to help illustrate her points.

“My talk today is about things grown-ups can do to shape us as children,” she said.

Molly’s main argument was that games like ‘peek-a-boo’ can change the world. She said, “Every moment together is an opportunity to connect, talk and play”. "Imagine the difference we could make if everyone, everywhere did this. To us. To children. It's so much more than just a game. It's our future,” she added.

Here's why playing with your kids is essential for their future success!

The seven-year-old told the audience that games like peek-a-boo may seem silly, but they fire neurons in kids’ brains and help boost memory and trust. She further even delved into the difficult discussion of how parents’ reliance on technology can have a harmful long-term effect on children. “Kids are hardwired to seek out meaningful connections and not receiving them causes confusion and stress,” she explained.

Molly showed an example of a father using his iPad and ignoring his one-year-old, who tried to reach out for attention. She said that if whole childhood was like those last 30 seconds, how hard it would be for a child to feel calm, safe, to learn to trust anyone and life long impact that would have. "Interactions, early and often, matter. Take it from me, the seven-year-old up here talking about brain science,” Molly said.

According to the official website, Molly was put forward for the TED talk by 'Thrive for Five', an organisation headed by former Australian PM Jay Weatherill, who wants to see better early education options for kids. Her speech has already been shown in maternity wards around Australia. Additionally, UNICEF has plans to support the global distribution of the film. It will also be placed in 1,400 doctor’s waiting rooms across Australia.