Amul has congratulated the ‘RRR’ team in its own way with a special doodle they shared on social media. 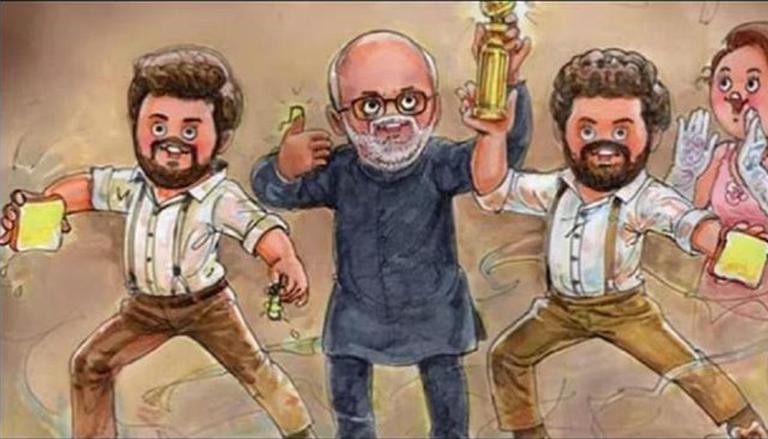 The song, which beat the likes of Taylor Swift, Rihanna and Lady Gaga, to win the prestigious award is the first time that an Indian and Asian production has won a Golden Globe.

Several celebrities and politicians extended their heartfelt wishes to Naatu Naatu’s music director MM Keeravani and other members of the 'RRR' team on their historic win. Prime Minister Narendra Modi congratulated the 'RRR' team and said it was a very special accomplishment. "This prestigious honour has made every Indian very proud," PM Modi tweeted.

Now, Amul has congratulated the ‘RRR’ team in its own way with a special doodle they shared on social media on Thursday. The dairy brand had the picture of MM Keeravani and the two stars on which ‘Naatu Naatu’ has been picturised - Ram Charan and Jr NTR - on either side of the music composer in the same look from the song. While Keeravani was holding the Golden Globe award he accepted, the ‘RRR’ stars were holding buttered slices of bread.

The company also gave its own full form to the abbreviation 'RRR', which stands for 'Rise Roar Revolt', as "Really Remarkable Reward!" Amul also put a witty twist on 'Naatu Naatu' to promote its butter with the text on the doodle that said, "Say Haan not Naa tu butter!"

The fast-paced song 'Naatu Naatu', which features the film's co-leads Ram Charan and Jr NTR, was recently shortlisted for the Oscars in the Best Original Song category. The final nominations for the Oscars will be announced on January 24. 'RRR', which was released globally in Hindi, Tamil, Telugu and Malayalam, submitted itself for consideration in various Oscar categories.

The film has also been nominated for the 'Film Not In English Language' category at BAFTA Film Awards 2023.