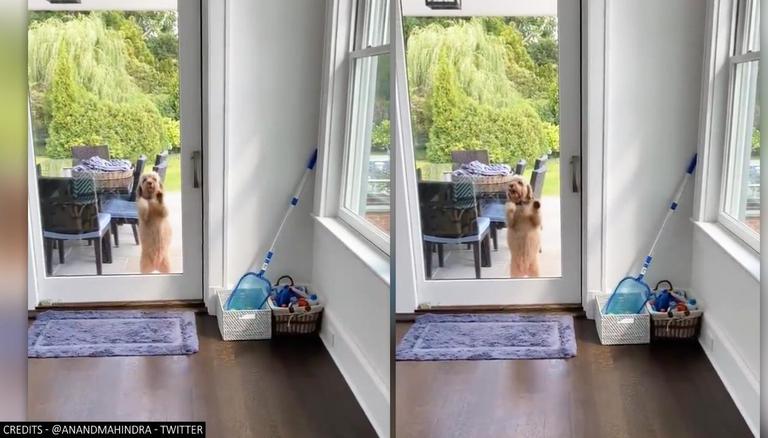 
Anand Mahindra, the Mahindra Group chairman frequently shares several jolly posts on his official Twitter account. This morning he made Twitter a medium to give some advice to his 8.4 million followers. The Indian billionaire businessman who is presently in the United States for few days posted a very adorable video of a friend's puppy that served as the inspiration for his life advice.

In the video footage, it is visible that the dog can be seen outside the home, begging to be let inside. The adorable dog is seen standing on its hind legs, paws at the glass door. It seems that the charming little dog has been separated from its family and friends.

Anand Mahindra said that the video was shot from his friend's home near New York. He even said that his friend had ultimately allowed the dog inside. He also claimed that his friend did not allow the dog before filming a brief video to just illustrate that tenacity later pays off.

While sharing the video, he captioned it as, “At a friend’s home near New York. Yes, yes, I did let her in but had to take this clip as a reminder that persistence always pays off. Never give up.”

At a friend’s home near New York. Yes, yes, I did let her in, but had to take this clip as a reminder that persistence always pays off. Never give up…😊 pic.twitter.com/TpRhDWkWHs

Since it was uploaded this morning, the video instantly became viral. The video has received over 26,000 views and counting. The video also garnered a huge number of comments. Many others praised Anand Mahindra in the comments section, for posting the video, calling it "sweet" as well as “cute”.

While some Twitter users had commented “I wonder how pets especially dogs are so intelligent and loyal also. Cutie”, and the other said “Thanks for sharing this cutie post”.

This is not the first time he is sharing some inspirational and jovial posts. A few days back, Mahindra posted an old advertisement for the five-star Taj Mahal Palace hotel, remembering the good old days when one can stay the night for Rs 6. The 1903 advertisement, shocked him to his core where he claimed to have a time machine is necessary to travel back in time.

Meanwhile, Mahindra also heaped praises for the medal winners of the Tokyo Olympics and taking it to Twitter, said that in honour of gold winner Neeraj Chopra's remarkable achievement in the men's javelin throw, he will award him with an XUV 700.