'Are You An Alien?': Elon Musk Has Cryptic Reply To Netizen's Bizarre Query

Tesla and SpaceX Chief Executive Elon Musk has once again made global headlines-this time with an uncanny tweet. Responding to a user he said he was an alien.


Tesla and SpaceX Chief Executive Elon Musk has once again made headlines — this time with an uncanny tweet. While Musk’s fascination with aliens is not hidden to Twitter users, this time he took it a step ahead by declaring himself as one of them. Late last year, the billionaire had sparked a slew of Twitter responses by wildly claiming that it was the aliens who built Egypt’s pyramids.

READ | 'Passed out & Bankwupt’: Here's the story behind Elon Musk's 'iconic photo of the decade'

It all started after Musk, taking to the microblogging website claimed that the earth was “not flat” but a “hollow globe” where “Donkey King lives”. While his tweet caught the attention of nearly three hundred thousand people, it was one particular user who asked him if he was an alien. “Are you an alien?” wrote the user named ‘shbzz’. Musk played along and answered “obv” meaning obviously. 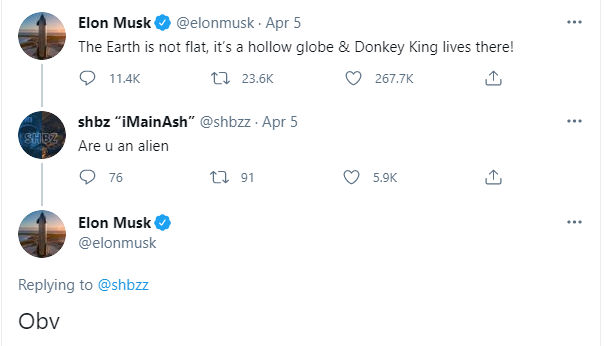 Their conflab has now created a never seen stir on the Internet with Musk’s tweet racking up over nearly 15 thousand likes. Hundreds of thousands of astonished users have flocked to the post with many of them jokingly substantiating the 49-year-old’s claim. One user, meanwhile, asked Musk if it was difficult to act like a human, while another said that he was just plain “genius.”

Hehehhe, Elon you are big man don't give up!

How hard is it to act as a Human @elonmusk ? pic.twitter.com/lfDSMamXpz

Last week, Musk triggered another online storm after he claimed he would put cryptocurrency Dogecoin on the moon in near future. While many people doubted the sincerity of the post because of the timing, which came exactly on April Fool’s Day, some suggested that Musk could be telling the truth, provided his newly found appreciation for digital currency and his long-standing love for space. Musk, who is the CEO of SpaceX, is known for sending bizarre things to space, which includes a cheese wheel and a Tesla car.