Sheldrick Wildlife gave a sneak-peek into forest life and revealed how wildlife lives happily with humans. 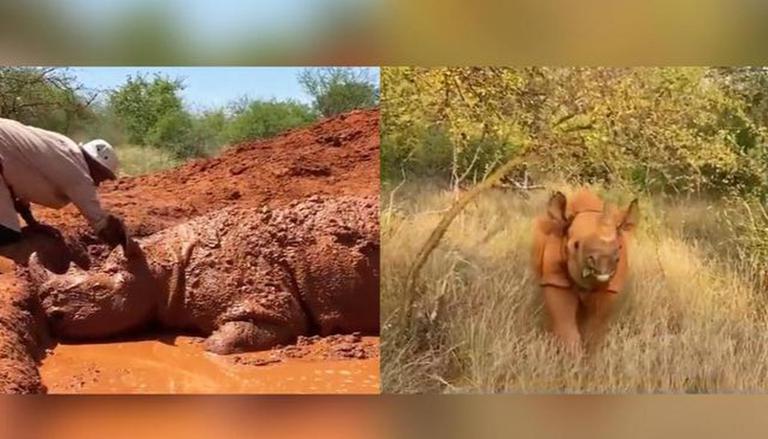 
Kenya-based wildlife conservation named Sheldrick Wildlife Trust recently shared a heart-winning video on Twitter. The wildlife page took to the microblogging platform and shared an adorable clip of a baby rhino named Apollo. The clip is now extensively surfacing on the internet and netizens are showering love on baby rhino.

Sharing the video, the trust also gave a sneak-peek into forest life and revealed how wildlife lives happily with humans. While posting the one-minute and seventeen-seconds long clip, Sheldrick Wildlife Trust explained how the baby rhino is having a gala time with his companions. In the clip, the orphaned black rhino is seen enjoying his creature comforts. Meanwhile, his caretakers are seen giving treats to the baby rhino with a bottle of warm milk. The endangered rhino is given a 'luxuriating mud bath' along with a 'soothing belly rub'. He is also seen enjoying his freedom by running around the green landscape.

Earlier on September 21, 2019, the security officials of the Sheldrick Wildlife Trust were on their routine patrol, checking out difficult-to-access water-borne areas across the Yatta Plateau in search of illegal poachers when they suddenly noticed a rhino calf standing near its mother's dead body. The wildlife officials immediately called helicopter service and rescued the baby rhino. Orpahned Apollo is currently being raised by the caretakers of the SWT's Kaluku Field Head Quarter in Kenya.

Orphaned black rhino Apollo loves his creature comforts: A warm bottle of milk, a luxuriating mud bath and a soothing belly rub from his loving Keepers. Learn more about how we are caring for this endangered individual: https://t.co/pGVBqa1a0F pic.twitter.com/g6flKhfDdF

The clip has garnered over seven thousand views since it went online. It seems that netizens could not resist reacting to the post. One user called the baby rhino a "handsome body",  while others were in awe after watching the video.

He is the most handsome baby boy. I just love him❤️ Thank you @SWT for caring for this sweet baby

Another user took to the comment section and expressed his honest feeling, look what he wrote.

Couldn’t resist, just had to adopt this cute baby! I urge others to do the same!

A third person said that it was always good to watch the baby rhino Apollo.

It is always lovely to watch a video on Apollo!👍🏿👩🏿‍🦱❤️

Another user said the baby rhino is overwhelmed by the homely treatment and he will never "re-integrate".

Apollo will never re-integrate. He has everyone trained 🤗🤗🤗

The video is now surfacing on all the platforms of social media, users have flooded the post with warm comments. Some dropped heart emoji while others dropped fire emoticon.

READ | Rohit Sharma bats for a noble cause in MI-RCB match; dons shoes with 'Save Rhino' message

Another Twitter user lauded the Sheldrick Wildlife's move and extended good wishes for the caretakers and baby rhino.

God please keep and bless Apollo and all the wonderful carers and supporters. Amazing efforts, attention, work and devotion.