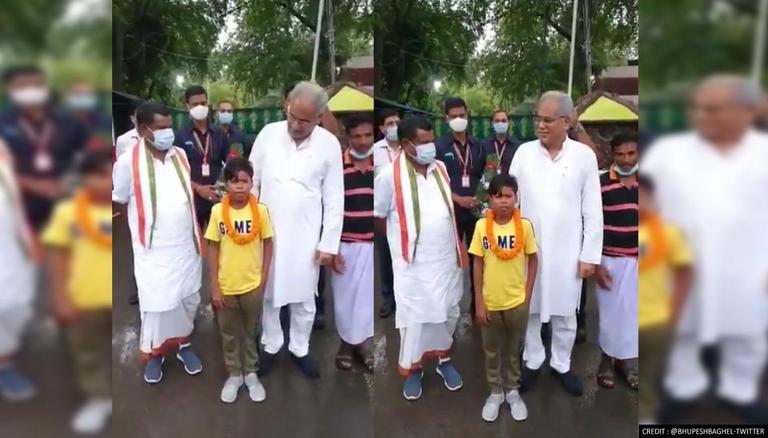 
In what seems like one of the most loved viral videos in India currently, Bachpan Ka Pyaar is all the rage and Chhattisgarh CM also might have caught a liking for it. The Bachpan ka Pyar viral video has a little boy Sahadev singing his heart out while his parents are heard in the background prompting him with lyrics. The Boy singing Bachpan ka Pyar has now been felicitated by Chhattisgarh CM's Bhupesh Baghel.

After notable celebrities participating in the Bachpan ka Pyar viral video trend, Chhattisgarh CM hopped on the bandwagon to felicitate Sahadev Sang. Taking to his Twitter, the CM documented his visit to the little boy in the viral video, who was seen adorned with a flower garland. In the video, a smiling CM with his entourage stood next to Sahadev as he recreated his viral song with zeal.

From Instagram to YouTube, the internet was blown away with the virality of the video even after being uploaded two years ago. The video trended on every platform with Instagram reels garnering millions of views online. Starting off with singer Badshah who was quick to release a remix version of the song with a video of him grooving on the beat with his friends. The remix instantly went viral on the internet with many creating comical videos with the viral audio.

Comedian Bharti Singh also took to her Instagram to groove to the remix of the audio with Sudesh Lehri and Krushna Abhishek. She uploaded the video with the caption, 'back with the bang.. always fun with bachpan ka pyaar 😜🤪'.  Another star to hop on this trend was Yeh Hai Chahatein's Abrar Qazi who also took a comical approach to the video.

Mumbai Police's official Twitter handle was quick to use this opportunity to spread awareness on cybersecurity. Using the viral song's lyrics, Mumbai Police urged people to not forget their password writing, 'Was your bachpan ka pyaar a secret? Then your password might still be safe. Just add a few special characters to it!'.

READ | Little boy gets grumpy for not getting a burger; Internet is in love with the viral video

Just add a few special characters to it! #PasswordBhoolNahinJaanaRe#PasswordShareNahinKarnaRe#CyberSafety pic.twitter.com/mn4EKbvtU7