Can You Spot Snake In This Photo? Perfect Camouflage Image Confuses Netizens

An Indian Revenue Service (IRS) officer Naveed Trumboo has shared a picture of a snake hiding among leaves. The picture has caught the attention of netizens. 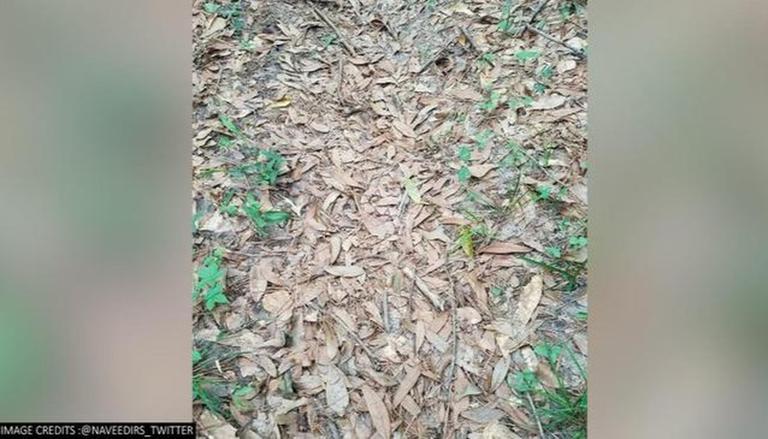 
An Indian Revenue Service (IRS) officer Naveed Trumboo has shared a picture of a snake hiding among the leaves. The photo, which has now gone viral on social media, shows fallen leaves and a snake hiding in there. Trumboo has mentioned that there is a snake in the picture. Surely, it is somewhere, but can you spot it? Take a look at the picture here:

In case you want to test your eyesight, try finding the snake in this pic. pic.twitter.com/jlgRsaD6Lc

Spot snake in the picture

Since being shared on Twitter, the picture has gathered thousands of likes and several reactions. The post has been flooded with netizens trying to find the snake. One user commented, "I think I saw two snakeheads near each other in the upper right-hand side of the picture." Another individual commented, "That was definitely hard to find, it did an extremely good job of blending in." Another netizen commented, "In the centre, one only has to differentiate between the patterns". Check out some netizens reactions:

Is this the one? pic.twitter.com/uX4oydlHjC

The Green snake trying to climb on the leaf?

Have i spotted it correctly? pic.twitter.com/5ohsvR7HpT

Oh my god its a gaboon viper. At the centre. Where did You click it? But the background seems to be in India. Gaboons are not native to India

In the centre, one only has to differentiate between the patterns

I think I saw two snake heads near each other in the upper right hand side of the picture.

After the struggle of finding the snake in the picture, Naveen Trumboo mentioned where exactly the snake was present in the image. He wrote, "Dead centre, left to the green leaf. Perfect camouflage". Even after Trumboo pointed about where the snake was, some of the netizens were not able to find it in the image. One user commented, "OMG, I couldn't see even after you'd pointed out, I'd to zoom in". Another individual wrote, "Yes it is there. I couldn't see it even after zooming".

OMG, I couldn't see even after you'd pointed out, I'd to zoom in.

Yes it is there. I couldn't see it even after zooming.