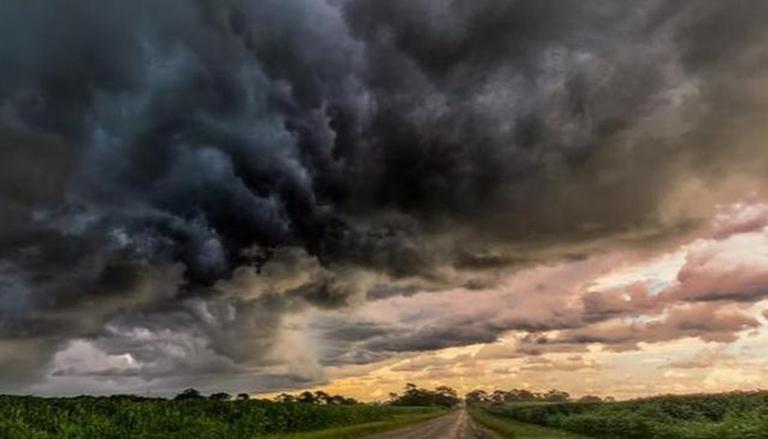 
It can be said without a shadow of a doubt that nature offers an endless dose of positivity and mankind is yet to tap a major portion of it. Nature has its own incredible means of exhibiting its beauty, for which, it can even put to use, something as frightening as a thunderstorm. A video currently doing rounds on the internet depicts a massive supercell thunderstorm unleashing rain across farmland in southwest Saskatchewan, Canada. Though one would voice concern over the plight of the people to whom the farm belonged, the video was captured in an impeccable manner that one would end up rewatching it endless times.

The viral video opens up to show a supercell thunderstorm discharging rains all over the farmland. Sharing the video, a Twitter user going by the name Jenny Hagan LostInSk explained that the footage was captured at the time of sunset near the community of Cantuar, which was under a thunderstorm warning at the time. Furthermore, the video has been provided by Storyful under agreement with Hagan. She wrote in the caption, "Sunset #skstorm are simply put the best. The lightning was flashing off frame unfortunately but man! Last night June 27 near Cantuar #Saskatchewan".

Sunset #skstorm are simply put the best. The lightning was flashing off frame unfortunately but man! Last night June 27 near Cantuar #Saskatchewan pic.twitter.com/icd2iRYVPK

For the unversed, the supercell storms are thunderstorms with a deep persistent rotating updraft. Supercells are rare, however, are responsible for most severe weather events, especially tornadoes. There are many videos displaying similar incredible facets of nature. Earlier, a video of a picturesque cloud formation rolling over Bluff Knoll peak in Western Australia's Stirling Range went viral. The video was originally shot last year by Jigar Gosrani shortly after sunrise who shared the video on his Facebook account.

The trending video has gained traction on the internet and has accumulated around 35.8K views accompanied by several likes and comments. The video has also prompted many to express their views, "So scary but so beautiful", a user wrote. The second user spelled, "Woohoo! Nice time-lapse Jenny!!". The third user expressed, "That is truly great work by you and Mother Nature".

READ | Did BTS' Jin binge on Dosa during his Jeju vacation? ARMY reacts as his pics go viral

So scary but so beautiful.

That is truly great work by you and Mother Nature. 💯