Canada: Woman Spots Alligator At Home And Calls Up Police, Later Realizes It Was A Replica

Recently, a woman from Canada spotted a giant alligator in the staircase of her building and immediately dialled the police for help, watch what followed next. 
On normal days, people do not expend to find an alligator in their homes. However, a woman from Canada recently spotted a giant alligator in the staircase of her building and immediately dialled the police for help. Calling the police emergency number for help, she informed them about the presence of an alligator. After examining the complaint, it turned out that the giant reptile that horrified the Canadian woman was nothing but a fake replica.

Woman spots alligator in her building, police reveals its a replica

Jason Doucette, a community police officer with Vancouver Police Department, who was handling the woman's complaint, took to his Twitter account to share the 'hysterical' incident. He uploaded a picture of the golden alligator replica as he mentioned his relief at the sight of the fake reptile. Along with the post, he mentioned how the officers called him up at 7 am in the morning mentioning the incident where the woman had come face to face with an alligator, which was earlier found to be a 'realistic fake' dummy.

7am: Officers called to high rise condo to help ‘hysterical’ resident stuck in stairwell where she just came face to face with alligator.

Prior to arrival, alligator confirmed as a realistic fake 😳. Phew. pic.twitter.com/An2inrBCUB

Since the incident was revealed on Twitter, it has evoked many hilarious reactions among the Twitterati. While many deemed the incident funny, others were perplexed thinking about the cause of the confusion. Some state that the colour of the alligator was enough for the woman to realise it was fake. One user mentioned "Now that is funny. (Not for the poor resident!)" while another made a sarcastic comment stating "Someone is missing their gold alligator. I hope the resident is doing okay after you arrived?". 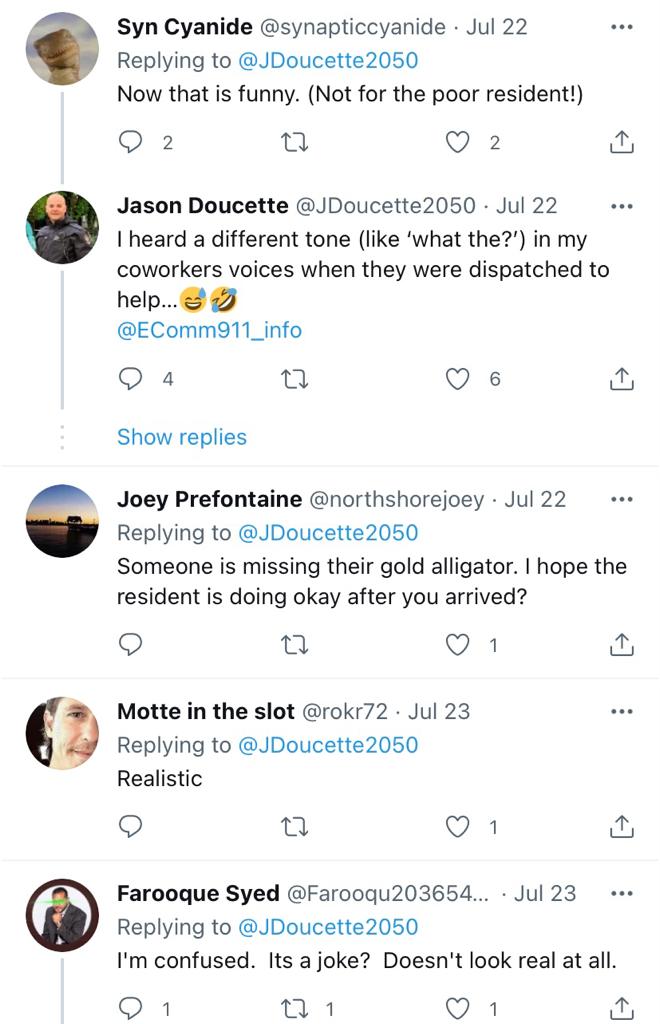 This 'bizarre' alligator incident will leave you in splits

In another incident relating to alligator scare, a distressed couple in Florida called 911 after spotting an alligator in their garage. What the police officer saw after viewing the situation, however, left him relieved and laughing. After reaching the scene, the officer found out that the alligator was actually a pool floatie. The police officer posed with the floatie to get himself photographed. The incident happened in Florida’s Polk County.

Taking to Twitter, the Polk County Sheriff posted the photograph of the officer with the fake alligator, who went to the garage after receiving an emergency call. Taking a dig at the situation, the tweet mentioned that' the gator turned out to be a pool floatie'. After the incident, the internet was flooded with hashtags like PCSO, #Crikey, #TheGatorHunter  #TuneInNextTimeWhenHeWrestlesAPoolNoodle.

Deputy Trexler went to a call about an alligator in a storage shed. He came…he saw…he conquered the beast. He even knocked the wind out of it. Literally. The gator turned out to be a pool floatie. #PCSO#Crikey#TheGatorHunter#TuneInNextTimeWhenHeWrestlesAPoolNoodle pic.twitter.com/5ZXRnG3tBW