A 46-year-old Chinese man became the first blind Asian and the third blind man in the world to scale up the tallest peak- Mount Everest. 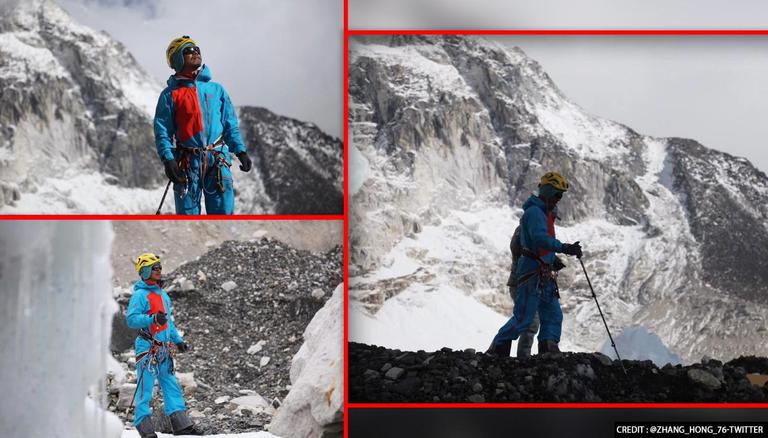 
With the attitude of 'Do or Die', a 46-year-old Chinese man with no eyesight has scaled up to the tallest peak in the world from the Nepal side, becoming the first blind man in Asia and the third in the world to climb Mount Everest. He completed the 8,849 meter-high Himalayan feat on Monday and shared the goods news on his Twitter account on Tuesday, after which not just his profile in particular, but the microblogging site in general, has been buzzing with praises for the man, who is now an inspiration for many across the globe.

Zhang took to his official Twitter handle to share the news. "I summited Everest," he wrote and went on to thank those who helped him achieve the feat. "I would like to thank my family, my guides, the folks at Fokind Hospital, and Asian Trekking, who have been extremely supportive of my journey," he wrote while adding that this was just the beginning and he has next on his list the seven-summits."

I would like to thank my family, my guides, the folks at Fokind Hospital, and @asiantrekking who have been extremely supportive of my journey.

While on the journey, he had been posting regular updates on Twitter. In one of the tweets in which he gave viewers a glance of him scaling up the snow-laden mountains through a video, he wrote, "I’m blind, but at least I‘m not afraid of heights."

I’m blind, but at least I‘m not afraid of heights.

This our 15th day at Base Camp and we are about to set off to camp 3 through Khumbu Icefall so that we acclimate before the final ascent on Everest.

I have already checked my equipment 5 times! pic.twitter.com/3CscxvMZB8

Inspired by Erik Weihenmayer, a blind American mountaineer who scaled Everest in 2001, Zhang who lost his sight at the age of 21 due to glaucoma, began training under the guidance of his mountain guide friend Qiang Zi. Talking about his time of training, Zhou said to a leading portal, "I was very scared, because I couldn't see where I was walking, and I couldn't find my center of gravity, so sometimes I would fall." He added, "But I kept thinking because even though it was hard, I had to face those difficulties, this is one component of climbing, there are difficulties and dangers and this is the meaning of climbing."

It is pertinent to mention here that Nepal reopened Mount Everest in April for foreigners after it was shut last year due to the COVID-19 pandemic.