In the picture, the dad has picked up the baby on his lap, and what is funny? Both the father-child duo is dressed in an identical banana costume; check it out 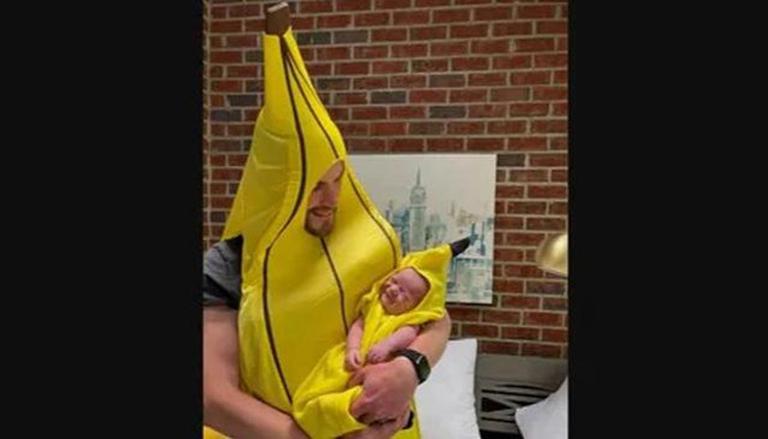 
Doting dads and their cute little kids are a favourite duo for the internet. A lot of fathers take care of their children, but a father can take it to a whole new level when it comes to doing something cool to make either delightful or embarrassing memories for their child. Here is one such cool dad who did something hilarious, which sparked a Twitter thread, and viewers cannot hold their laughter anymore.

I heard my husband whispering to our daughter about ordering something on Amazon for her. Then I came home from the grocery today to this. pic.twitter.com/1AXk7rXBfJ

A picture of a new father with an infant has gone viral on social media. In the picture, the dad has picked up the baby on his lap, and what is funny? Both the father-child duo is dressed in an identical banana costume, which the father apparently ordered from Amazon. This piece of information was shared by the mother of the baby Anna Gazmarian, on Twitter. She uploaded the image of her husband and the baby sporting a bright yellow banana outfit. She captioned it, "I heard my husband whispering to our daughter about ordering something on Amazon for her. Then I came home from grocery today to this." The adorable baby is seen smiling with her brightest smile in the picture while the father looks at her.

My husband bought this burrito blanket off of Amazon. Can’t complain, she seems happy 😂 pic.twitter.com/cyiSYfOOd4

Internet is gushing over the father-child duo. Netizens expressed loved and laughter at the picture in the comment section. Some rolled on the floor laughing, while others found the picture very "precious!" The post gathered over 245.1k views and love reactions with over 32k retweets. The retweets sparked a Twitter thread, which exhibited a wave of similar images. One user shared an image of their kiddo wrapped up in a “burrito blanket” brought from Amazon, informed a user named Mama Potato.

It’s all about life goals pic.twitter.com/Si9a2vwLow

I understand him perfectly 😂 pic.twitter.com/1K7e5T6xxx

Amazing parents and loved ones of the children posted a fair share of images that resembled the previous one, and viewers cannot stop laughing. Replying to Anna's tweet, one user shared a cute picture of a bonny lass dressed as Heinz Tomato Ketchup. The user captioned the image ' I understand him perfectly.' This was followed by another tweet by Morgan K, who sported a banana outfit as well but with his cat. Last but not the least, Dom Hodgson shared a fleet of images and captioned it, "It's all about goals." The tweet is a compilation of him and his adorable daughter dressed in a variety of Disney Princess outfits. The tweet amassed over 6K likes and 600 retweets.