Domino's Australia has come up with a bizarre pizza, an employee is seen making pizza with a thick slice of watermelon along with a cheese topping on it. Watch. 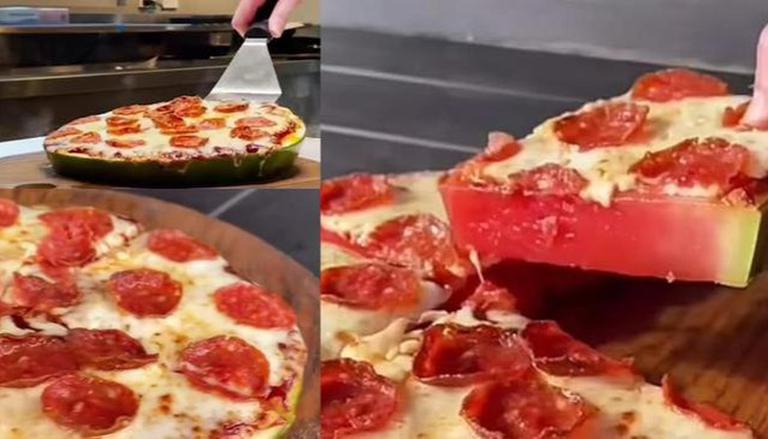 
In a bid to create a 'low carb' pizza, Domino's Australia has come up with a bizarre pizza combination. This innovation by the pizza delivery chain has stirred massive reactions on the internet leaving netizens pouring in hilarious comments. First shared by the official handle of Dominos Australia pizza, the clip shows a Dominos employee creating a pizza with a thick slice of watermelon along with a cheese topping. The video of the new pizza is extensively circulating on social media and has received all sorts of advice and comments.

While sharing the video, the pizza company wrote, "Y'all keep asking us for a low-carb crust option. Nah, when we saw @elburritomonster make a pizza on a watermelon, we HAD to give it a go. Would you try it?". The clip was shared on Monday, and so far has garnered over 15,000 views. Some users rejected the idea of watermelon being used as a pizza crust, while others said that it was an acquired taste. One Instagrammer took to the comment section and wrote, "This must be illegal". Another person who saw the pizza video said, "It still doesn’t sound as bad as pineapple on a pizza". A third person couldn't resist the reaction to the post and said, "please please stop the watermelon".

It seems watermelon pizza was not at all accepted by anyone. Another person said, "This gave me sleep paralysis again". Another user said, "This video feels illegal". The new pizza idea did not go well with the pizza lovers, as another person commented, "I would try this for a taste test and keep it near a bin so that I can quickly vomit if my stomach rejects it".

In a similar incident, pictures of several bizarre food combinations surfaced on social media, where people had come up with unthinkable food combinations. A person on social media uploaded a picture of Maggie Panipuri, replacing the sweet & sour water in the pani puri with Maggie. Another bizarre dish that caught the attention of many was ice cream paratha. The invention of new dishes went to extreme lengths when a person shared a picture of Chocolate Maggie. Meanwhile, some other bizarre food combinations included ketchup watermelon, Nutella Briyani, iced dosa, curd Maggie, and ice cream samosa.