the viral video shows that a drone is being rescued by the gadget itself. This video has amazed the netizens, have a look the unique video 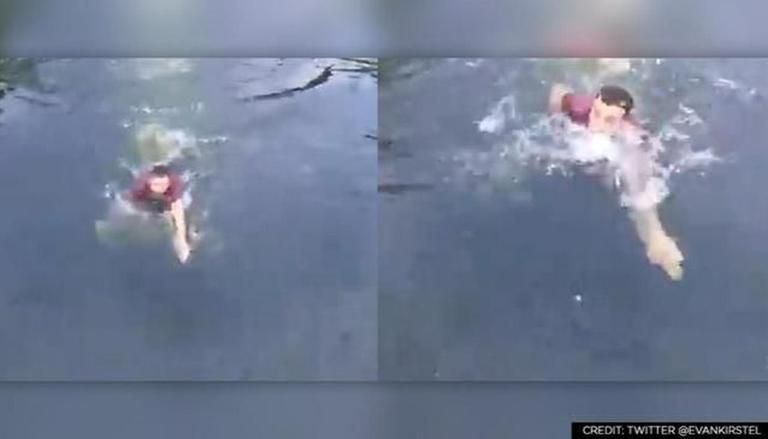 
There are plenty of videos on the internet that show some spectacular footage filmed by drones. It is proven that these unpiloted aircraft can capture very unique things when sent anywhere. One such anticipation as well as the amusing incident is seen in the latest viral video. In the video, a drone is being rescued and the whole process is captured by the gadget itself.

Rescue of drone captured by itself

The footage is currently being spread across multiple social media sites, including Twitter and Reddit. It is unclear when and where the video was shot.

The video begins with the drone showing a beautiful place where two men sprinting across a bridge. Within seconds, one of them dives into a body of water near the bridge. Running past the ducks in the water and then swimming, it seems that the person was going towards the drone in an attempt to grab it.

READ | J&K Police conduct drone surveillance in and around Srinagar, ahead of Independence Day

The video caption on Twitter read, "Drone captures a perfect shot of its own rescue”,

Check out the video below:

As it was uploaded, the post has received over 5.5k views, and the number is still growing with more than 90 retweets. It's also received a lot of hilarious feedbacks.

One of the users has commented, “Saving 1k€? No!”, while another has written, “Good save”. The third joked, “Now that’s meta!”

Another instance of Drone usage

Another amazing drone video has made rounds on the internet earlier this week, when Ellis van Jason, an excellent FPV (first-person-view) drone pilot, recently travelled to Venezuela to film a spectacular plunge down Angel Falls, the world's tallest waterfall at 3,121 feet (979 metres).

Van Jason's drone can be seen flying between trees and rocky outcroppings before landing at the pinnacle of the waterfalls and taking a spectacular descent. The drone gets so near to the water that particles strike the drone's lens, yet the operator avoids full immersion, which might be disastrous for the drone.

Apart from just capturing distinctive images and videos to entertain people, drones are becoming a standard for photojournalistic equipment for capturing captivating photos and videos of destruction caused by significant disasters. Many news stories on floods, landslides, volcanic activity, thunderstorms, wildfires, and earthquakes include their fly-through films. Drones have been used by international organisations such as the Red Cross throughout their global networks.