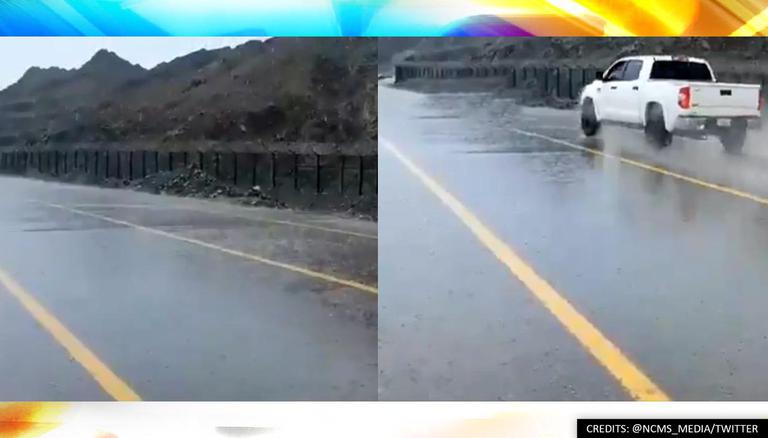 
United Arab Emirates (UAE), which is battered by a hot spell, has created its own rainfall using drone technology. On Thursday, the Middle Eastern Country flew several drones into the clouds and unleashed electric charges into them in order to induce precipitation. As per Dailymail, the drones are used to give an ‘electric shock’ to the clouds to ‘cajole them’ into clumping together and producing rain.

A video of the same was shared on Twitter by UAE's National Center of Meteorology and shows raindrops pouring on a highway. The Centre named the technology ‘cloud seeding’ and said that the purpose is to increase condensation in the hope that it might trigger a downpour. With the rain-causing technology, the Emirati administration is hoping to increase its rainfall and give respite to the residents.

"For arid and semi-arid regions, rain enhancement could offer a viable, cost-effective supplement to existing water supplies. Recent technological developments offer the potential of using rain enhancement as an important supplement to existing sources of groundwater and desalinated water. Through the UAE Research Program for Rain Enhancement Science, our country is leading the way in promoting innovation for the benefit of future generations at risk of water shortages," the National Center of Meteorology said in a statement.

UAE is one of the aridest and hot countries in the world owing to its proximity to the Arabian Gulf and the Gulf of Oman. The aforementioned cloud seeding operations are part of an ongoing $15 million (£10.8m) mission to generate rain in the country. While drones have indeed created rainfall, many scientists doubt whether it has a noticeable impact on rainfall levels.

The video has left the internet amused. "Great effort, technology to be transferred to the other countries. Congratulations' commented a user on the post. "That’s some next-level innovation!" meanwhile, another added. "Superb creativity," wrote a third. Yet again, a fourth user commented that nothing is impossible.