Elon Musk Shares Image Of 'light Reading' With Baby X; Here's What They're Up To

Elon Musk shared an image of his son X Æ A-Xii along with a book showing “beginning of A-12” article. The post was captioned "some light reading with lil X." 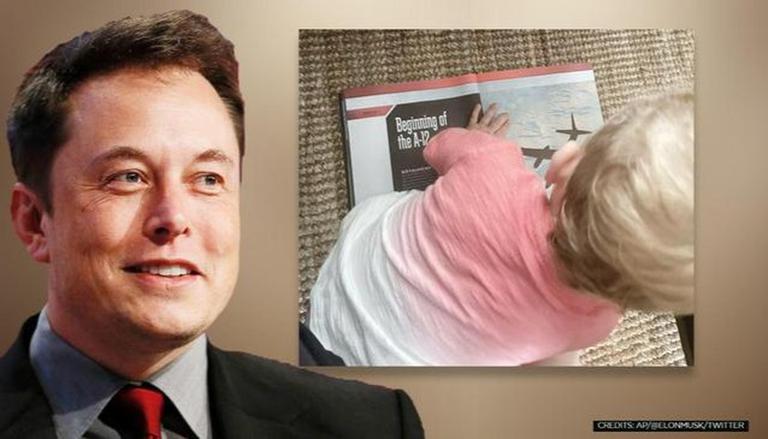 
Tesla CEO Elon Musk on July 15 shared an image of his son X Æ A-Xii along with a book showing “beginning of A-12” article. While the post was captioned “some light reading with lil X,” A-12 is an aircraft produced from 1962 to 1964 and flew from 1963 to 1968. Musk termed reading about the aircraft as “light” but it was the precursor to the twin-seat United States Air Force YF-12 prototype interceptor, M-21 launcher for the D-21 drone and the SR-71 Blackbird.

Notably, while explaining the reason behind naming his child with partner Grimes ‘X Æ A-Xii’, Musk termed ‘A-12’ as the “coolest plane ever” and hence, included the same in the name. Responding to a question asked about his son’s name on ‘The Joe Rogan Experience’, Musk said, “First of all, my partner’s the one that mostly came up with the name. I mean it’s just X, the letter X, and the ‘Æ’ is pronounced, ‘Ash,’ and then, A-12 is my contribution.” He then elaborated that ‘A-12’ stood for “Archangel 12, the precursor to the SR-71, coolest plane ever.”

X Æ A-Xii Musk was born on May 4, 2020, with Tesla CEO and Grimes as his parents. Shortly after the birth when the couple announced the unique name, it caused a wave of speculation over pronunciation and it is a joke. However, the couple has repeatedly clarified that their child is in fact named, X Æ A-Xii. Initially, the newborn was named X Æ A-X but in California, where the couple lives, names can only use the 26 alphabetical characters of the English language.

The Canadian musician, Grimes whose real name is Claire Elise Boucher, has separately also broken down the meaning of her baby boy. “X” stands for the “unknown variable.” Followed by “Æ” which is the Elven spelling of AI meaning “artificial intelligence” and the word for “love” in several languages such as Japanese.

Then she added, “A-12 = precursor to SR-17 (our favourite aircraft). No weapons, no defences, just speed. Great in battle, but non-violent.” The “A” in the name, said Grimes, represents “Archangel” which is her favourite song. Responding to a query on Instagram about pronunciation, she said, “It's just X, like the letter X. Then A.I. Like how you said the letter A then I.”