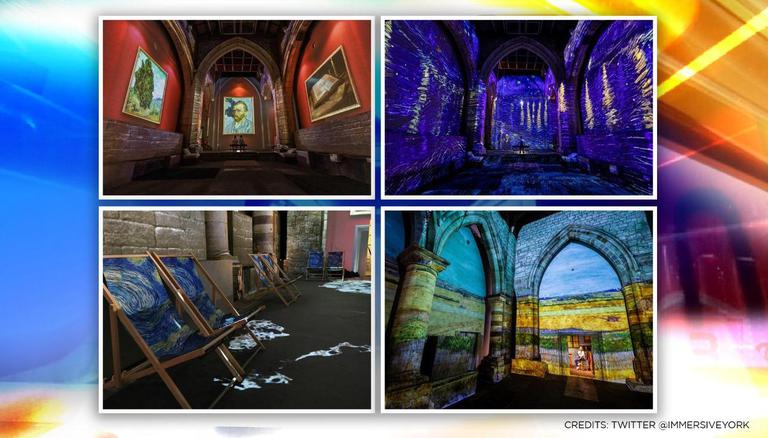 
At least two ‘Immersive Van Gogh’ art experiences have now opened in New York celebrating the work of the legendary Dutch artist, Vincent Van Gogh, nearly 131 years after his death. The first, Van Gogh: The Immersive Experience, debuted on June 5 and will run until October, the second Immersive Van Gogh debuted on June 10, the tickets for which went on sale Thursday. Van Gogh: The Immersive Experience features a one-of-a-kind Virtual Reality interactive exhibit with Artificial Intelligence (AI) which takes the visitor on a ten-minute journey through “A Day in the Life of the Artist.” During this unique and visually rich experience, the visitor can sit beside Gogh, and discover the inspiration behind eight of his iconic works, including Vincent’s Bedroom at Arles and Starry Night Over The Rhone River.

Anyone visiting York, can heartily recommend @VanGoghExpo A fabulous way of learning about the artist & the art. The VR add on is amazing. pic.twitter.com/ga7qbqBprX

The exhibition was scheduled to open in May but was postponed. It has now opened on June 10 at Skylight, 300 Vesey St, New York, along the waterfront in Lower Manhattan’s Battery Park City. It is in close proximity to New York’s bustling Brookfield Place and The Oculus, at the heart of NYC’s Financial District. Featuring a 75,000-square-foot space, the AI exhibition is “the largest Van Gogh exhibit in the world” and was created by Italian contemporary immersive artist, Massimiliano Siccardi, handled by Lighthouse Immersive and organized by Exhibition Hub that has a record of conducting 70 immersive edutainment experiences around the world. The exhibition was previously opened in toured in Toronto, Chicago, San Francisco, and Los Angeles.

READ | Paris: Never seen before painting of Vincent van Gogh to be put on display, auctioned

"Stayed around an hour, could have happily stayed all afternoon and chilled out there." Our visitors find the experience very relaxing. Book your tickets via https://t.co/Mh56QtibqV #vangoghimmersiveexperience https://t.co/J2y4aEcMFE pic.twitter.com/3TJ4xbnB5R

Sit back in a deckchair and step inside Van Gogh's mind, as over 200 of his artworks come to life all around you during Van Gogh: The Immersive Experience. Book now. https://t.co/ZlohE2OIoa https://t.co/juKQpX9jgq pic.twitter.com/oqO9Z9MG7k

The Van Gogh: The Immersive Experience features spectacular sounds, two-story projections, and never before seen 360-degree exhibit of unparalleled proportions of the Dutch painter’s most compelling works. “ In addition to a spacious central area where Van Gogh’s works stretch floor-to-ceiling, the experience includes separate galleries that chronicle his life, technique, and influence thru informative panels, larger-than-life re-creations, and engaging interactives,” the expo informed in a news release. The sound composition by Luca Longobardi at the exhibit can be listened on Spotify.

The rare and cutting-edge experience is suitable for a wide audience. The elements of the AI exhibit includes a sunflower display on the entrance, an animated version of Starry Night with a bench for viewing, narration of the artist’s work, VR experience; a special artist table where visitors can color their own Van Gogh-inspired pieces to then upload for display onto a virtual wall; and more, for an experience totaling 60 to 70 minutes, Thrillist explains. The 500,000-cubic-feet of AI experiences with moving images are made in collaboration with Emmy Award-winning and Tony Award-nominated designer David Korins.