The father of the four children Jared from Oregon had called for his kids Griffin, Hunter, Piper, and Penelope and while closing the call used the slang lexicon 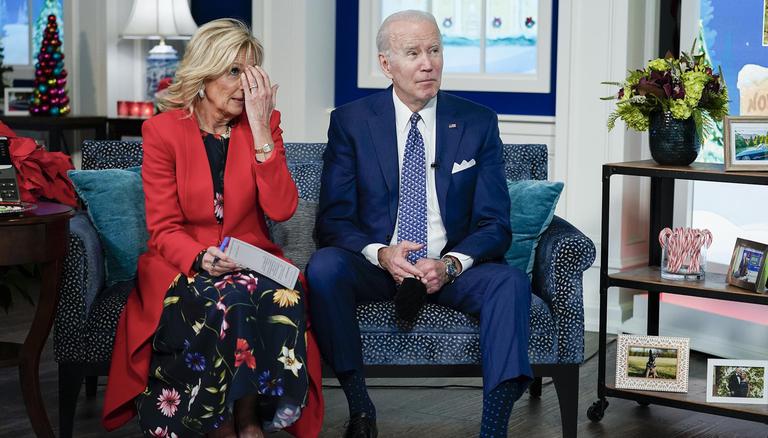 
In an unforeseen turn of events, US President Joe Biden repeated the phrase ‘Let's Go Brandon’ during the NORAD Santa Tracker event at the White House on Friday as he made a Christmas eve call to North American Aerospace Defense Command to update kids about Santa's whereabouts. The US President Biden and first lady Dr. Jill Biden were taking phone calls for NORAD's Santa tracker hotline when a man from Oregon, who otherwise was holding a pleasant conversation, told Biden, "Merry Christmas and let's go Brandon.” Biden replied to the man over the phone, “Let’s go, Brandon, I agree.”

'You know, Dad, ee have a Hunter too..' Biden says right before 'Let's Go Brandon'

The father of the four children Jared from Oregon had called for his kids Griffin, Hunter, Piper, and Penelope. Biden told Jared, "You know, Dad, we have a Hunter too. We have a son named Hunter and a grandson named Hunter" speaking about his son who passed from cancer. According to CNN, Jared's son Griffin told Biden he wanted a piano for Christmas, while Hunter requested a Nintendo Switch and Piper wanted a Barbie. While closing the phone call, the father said: "I hope you guys have a wonderful Christmas as well, Merry Christmas, and let's go, Brandon." While Biden smiled and responded, "Let's go, Brandon, I agree," the first lady remained silent.

BREAKING: Joe Biden was taking calls from the NORAD Santa tracking program and a dad ended the call with "Merry Christmas, and Let's Go Brandon."

The US president wished the father and his kids a Merry Christmas, not only that he spent time asking the kids what they wanted for Christmas,” according to CNN’s White House Correspondent Jeremy Diamond.

The chant ‘Let’s Go Brandon’ became popular during the NASCAR race when a reporter mistakenly claimed that the crowd assembled there was chanting ‘Let's Go Brandon’ when they actually were chanting “F*** Joe Biden,” using profanity. The journalist also told NASCAR Xfinity Series driver Brandon Brown that the crowd was yelling Let's Go Brandon whereas they were yelled the cuss word to demonstrate disappointment in their Democrat President. The three-word exhortation was then coined by GOP supporters and it gained a huge momentum to hurtle insults at the Biden administration.

READ | US: Donald Trump grateful but surprised with Joe Biden's admiration for his COVID success

"Let’s go Brandon” became synonymous with criticism of the Biden administration as a joke and is deemed derogatory by the Dems and Biden supporters. 'Let’s go, Brandon' song also went viral on TikTok recently scooping tens of thousands of likes. The phrase has tens of thousands of hashtags, memes, several account names, and handles online, as well as merchandise. Rep. Jeff Duncan, R-S.C., was also recently seen sporting a "Let's go, Brandon" mask.

Brandon Brown, however, has expressed displeasure at the appropriation of his name, as he had told the media that he does not want his name to be associated with a cuss word for an anti-Biden slogan. Twitter, although, poured a slew of reactions. While some criticised the man for ‘not respecting the office’ the others had a comical response.

We need to learn what respect is again in the country!

Can we just disagree with each other about politics civilly? I mean this is pretty disrespectful. There’s plenty of people I disagree with without debasing myself by telling them “f you” to their face.

It's so sad that on Christmas, this person chose to be mean-spirited and hateful.

It was just “fat” and that moment was hilarious

He deserves every bit of it! Let’s go Brandon!

I don’t like Biden either but you are absolutely right. There is no respect any more at all.

I am not a Democrat, but I feel the whole 'lets go Brandon,' thing lacks class and taste. Lets stop this now and critique policy issues.

Grown adults think this is funny.. let that sink in. Man

He knows what it means. But he has class and respect unlike the dad who said it on Christmas call for his kid.

WE RECOMMEND
Omicron: Biden's plan to provide 500m free COVID tests 'too little, too late', say experts
Joe Biden refers to Kamala Harris as 'President' in latest verbal goof-up | Watch
US: 'Surprised' Trump thanks Biden for acknowledging his govt's COVID vaccine efforts
US President Joe Biden will run for reelection in 2024 if he is 'in good health'
US: Nancy Pelosi lauds Biden after he signs bills banning imports from China’s Xinjiang
Listen to the latest songs, only on JioSaavn.com