It was the G7 leaders 'family photo' that most interested netizens on social media who couldn't help but take a dig at the carefully orchestrated photograph. 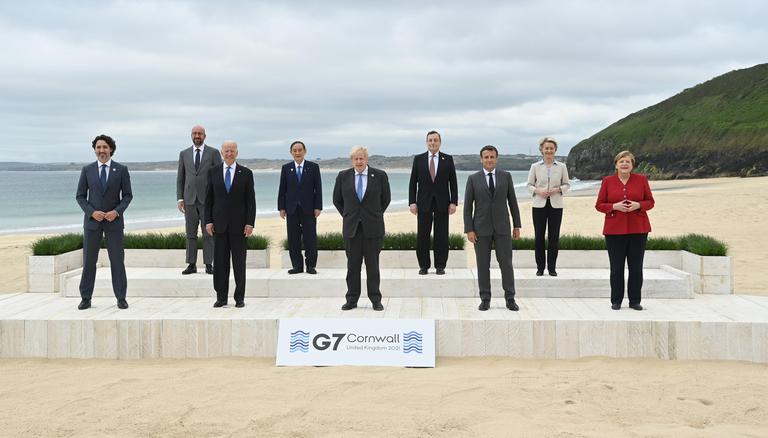 
Group of Seven (G-7) leaders held their annual meeting this weekend in Cornwall, southwest England to discuss a range of issues from COVID-19 vaccines to a global path for recovery. More than a year into the pandemic, the Group of Seven-- made up of the UK, US, Canada, France, Germany, Italy, and Japan as well the European Union discussed the key 'lessons' of the health crisis and how the world could avoid a repeat of mistakes such as the economic recession of 2008. With a pledge of 1 billion COVID-19 doses to lower-income nations and a plan for global recovery, the G7 summit on 'Build Back Better' became the first major physical event that saw the participation of world leaders.

The photo commemorated the commencement of the first meeting of the summit on June 11. Here's what netizens thought about the photograph.

G7 leaders have gathered for a family photo on Carbis Bay Beach ahead of the first meeting of the G7 Summit.#G7UK pic.twitter.com/k8FsRvPTMO

Typical. It was the honour of my life to attend the G7 Summit today & be photographed with world leaders. Just as the photo was taken I was dive-bombed by a seagull & fell over the parapet onto the beach. You can just glimpse my whitened knuckles to the right of Merkel's hips. pic.twitter.com/UCMwXBKMwj

Who's the guy on the right watching G7 Summit through binocular??🤔 pic.twitter.com/5qulSJILmI

I recognise that beach. I even painted it. pic.twitter.com/qiQ7TqKN5k

The United Kingdon hosted this year’s G7 conference in Cornwall from Friday, June 11 to Sunday, June 13 and welcomed the heads of from the United States, United Kingdom, France, Italy, Japan, Canada, and Germany, as well as representatives from the United Nations and European Union. Two guest countries India and South Korea attended the G7 meeting via video-conferencing. Apart from a pledge to supply 1 billion COVID-19 vaccine doses to 20 lower-income nations, with the US pledging close to 500 million, the leaders also disucsses issues like regional security, free and fair trade, climate change, values of open society at the discussion table.