A heartwarming image showing a police officer having lunch with a homeless person is making several rounds on the internet and has recently gone viral.

A heartwarming image showing police officer having lunch with a homeless person is making several rounds on the internet and has gone viral. A Facebook user revealed in a caption that her wife was out on her lunch break and observed the lunch between the two individuals. The post has garnered thousands of shares with hundreds of likes and comments. The internet users have not applauded the police officer for “doing so much for community” but also wished the best for the homeless woman. Many others appreciated the compassion of the policeman and called it a “great job”.

One Facebook user wrote, “When you are in the midst of chaos, small yet kind gestures like these assures you humanity exists. Thank you for sharing. Let us put it out in the universe that we see a lot of people like Officer Rivers and that they help folks like Michelle there get back on their feet. As for Officer Rivers, be yourself, the world needs more folks like you.”

Another said, “ Some people are only one paycheck of the way from being homeless. Kudos to this police officer for being a great human.”

One internet user also wrote, “Not only do I see a great man that puts his life on the line for us...I see an awesome human being.” 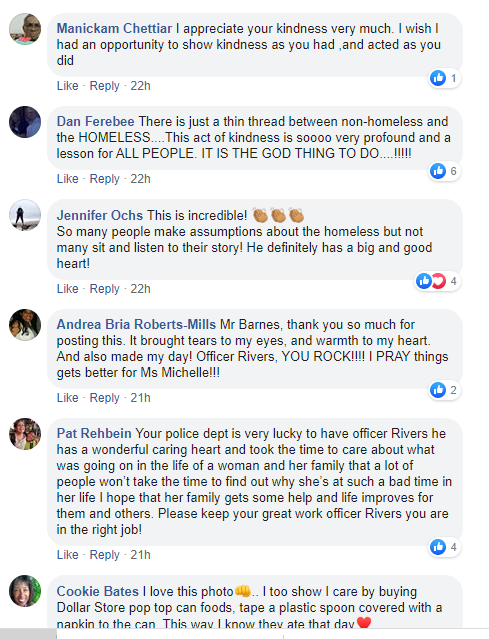 While this officer was spotted having lunch with a homeless individual in the United States, a UK group has managed to collect  £6,000 ($7,693) worth of food for the needy and homeless by playing 'Wetherspoons the Game'. As per the reports, the game was played at The Richard John Blackler Wetherspoon pub in Liverpool on the night of March 3 and sufficient orders were placed to feed 400 people. The event was organised by a group on a monthly basis visit different Spoons across the nation before sharing their table number on social media.

According to the reports, the group's followers are then invited to place orders on behalf of the table using the Wetherspoon app. The meals are then packed up and distributed among homeless people with the help of local charities. As per the reports, a huge amount of food was gathered within just two hours.

Read - 11 Ducks Daily Meet To Go For A Swim; Netizens In Awe Of This Unique Friendship Video