A hysterical video has surfaced and is going viral where one can spot a groom working on his wedding day at his mandap. Watch the bride's hilarious reaction. 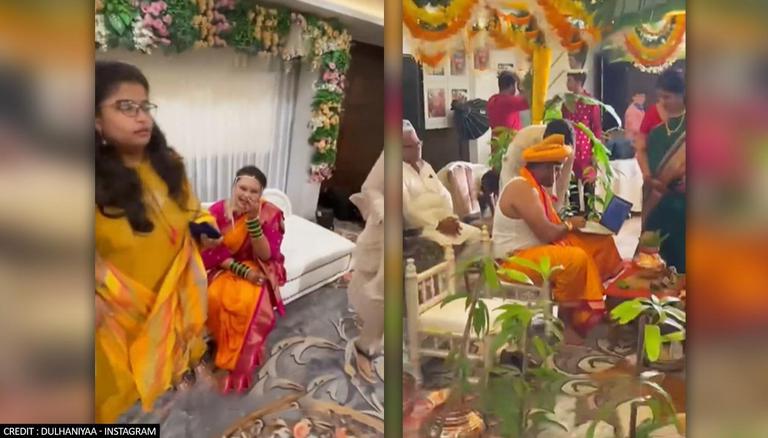 
While work from home has become the norm post-COVID-19 outbreak, this groom took the concept to another level as he was spotted working on his laptop on the day of his wedding. From the pandora's box of social media, a hilarious video has surfaced and is going viral where one can spot a groom working on his wedding day at his mandap as he is surrounded by relatives and guests. The bizarre video showcases the pandit ji waiting for the groom to complete his work before he could begin the wedding nuptials.

As the groom works on Laptop, the bride bursts into laughter

Even though the whole premise of a groom working on a laptop at his D-day should be hilarious enough for the netizens, what actually stole the show, in this case, was the bride's reaction. As the video progresses from the groom's funny 'work from home' stint, it further panned across the hall to capture the bride. The bride, who can be seen donning a traditional Maharashtrian attire on her special day, is seen bursting into laughter The camera then further pans back to the groom, who is finally done with his work as he passes his laptop to somebody in his quest to get married eventually. Have a look.

The video went viral on 'dulhaniyaa', a popular wedding-related page on Instagram. The text attached to the video read, “Work from Home? Nah… It’s Work from Wedding.” The page, in the caption, wrote, “Working Dulha & Laughing Bride, Welcome to Weddings’21.”. While the majority of the audience expressed their giggles and guffaw through the comment box and many cracked humorous jokes based on the happenings of the video, there were many who condemned the toxic office culture, which has proliferated with the new ‘Work from Home’ trend and has sent the work-life balance for a toss.

While the video got famous for its bizarre plot, some people who actually attended the wedding, came to the groom's rescue and clarified that the groom isn’t actually working. One of the users wrote, “He is not working. He is just setting up the video call so that people who could not come can attend the virtual wedding. Watch some of the hilarious reactions.

READ | No 'Mutton Curry' on menu, Odisha groom calls off wedding and marries another woman

Earlier in February, a photo of a groom hooked to his computer screen while the newlywed bride waited for him went viral, sparking a crazy meme-fest on the internet.

READ | 'Human-error': Bride called by groom's ex's girlfriend's name during wedding photoshoot
READ | 'Scared' groom runs away from own wedding after bride collapses on stage; Watch the video
READ | Groom teases his bride during 'varmala', watch what happened next