In the 14 second video, posted by a user on Reddit, a grey feline can be seen seated comfortably in a chair. The owner wrote that cat is a reluctant coworker.

A video of a cat unwilling to vacate a chair for the owner as he works from home during the lockdown has captured the attention of the internet. In the 14 second video, posted by a user on Reddit, a grey feline can be seen seated comfortably in a chair. The owner wrote in the caption that the cat often stole the chair and bit him when he tried to remove his feline coworker he didn’t have a choice with. The video has gained over 1.6k upvotes as commenters poured in funny reactions on the entire incident.

Several people have been asked to work from home during the global health emergency. While the internet is abounding with videos of challenges the employees are facing during work from home, most have cited their pets as the greatest distraction. The cats, in particular, are stubborn, as can be established from the many videos the owners have shared on the internet. “She's been sitting there Mon-Fri 9-5 for years, and now YOU come along?” wrote a Redditor. The comment gained 124 points. “It was never your chair,” wrote the second. “Hostile work environment! Report her to HR ASAP,” joked a third user.

My coworker steals my chair and bites me if I try to move her. from AnimalsBeingJerks 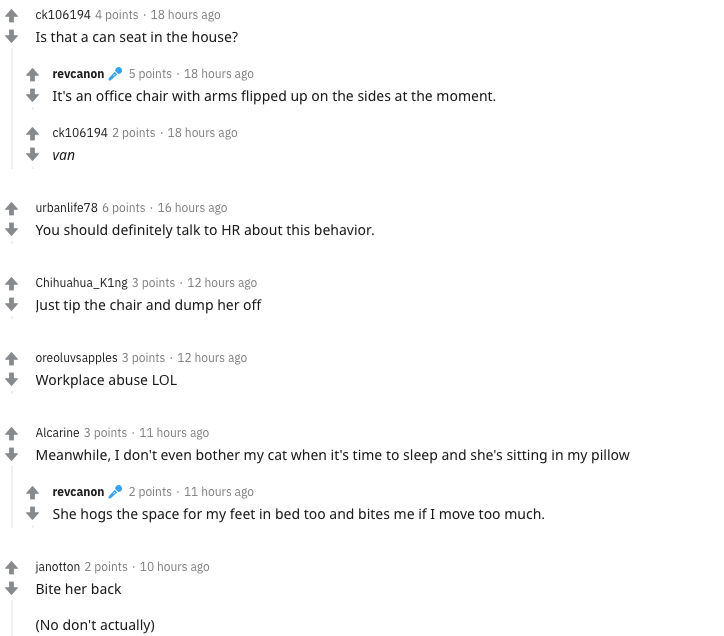 Cats are a distraction

The hashtag #workfromhome has been trending online for some time as people from all over the world unite to flood social media with several such hilarious stories. People are posting videos showing their funny makeshift work desks and are sharing side-splitting clips of their pets joining them as a team on their work set up at home. Twitter users fashioned some of the odd objects like laundry baskets and desks created out of the microwave. They then cited the distractions that come along with it. Users shared videos depicting their vigour early morning as they sit to focus on work at their makeshift work desks, and end up with their stubborn pet coworkers distracting their focus. Most cats can be seen slouching on the laptops and documents.

Read: Coronavirus: Assam Govt Offices To Have 50 Per Cent Strength, Rest To Work From Home