How Do Astronauts Wash Their Hair In Space? Watch This Viral Video To Know

The NASA astronaut Megan McArthur has explained the entire procedure as to how astronauts maintain their hair in outer space, Watch the interesting video 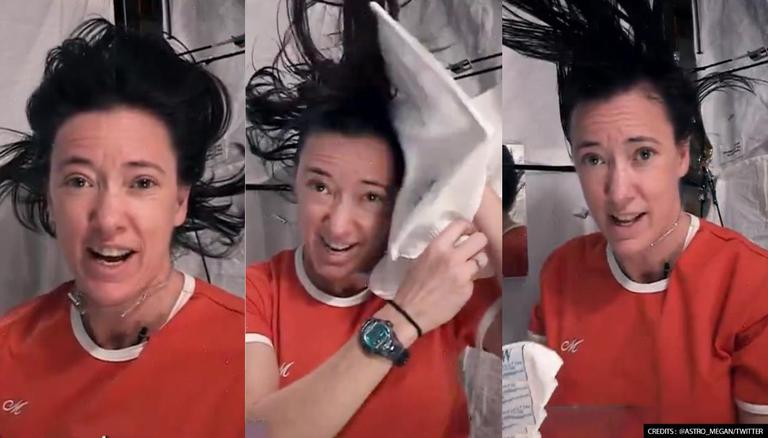 
Sometimes we all wonder how is the life of an astronaut in outer space and to our surprise a very interesting video clip has been published recently by a NASA astronaut showing how she keeps her hair clean. The astronaut Megan McArthur is now stationed at the International Space Station (ISS) and has explained the entire procedure as to how astronauts maintain their hair. She captured the video and uploaded it on her official Twitter account.

While sharing the video she captioned the clip as, “Shower Hour! Astronauts can’t take showers in space or the water would go everywhere, so I thought I would demonstrate how we keep hair clean on the @Space_Station. The simple things we take for granted on Earth are not so simple in micro-gravity!”

Video of 'shower hour' in space

At the beginning of the video, it is seen that she has introduced herself that she is frequently asked how astronauts do everyday activities while on the International Space Station. So, she said that she finally decided to show her daily chore in space and starting with hair wash. She showed how to put water on hair while someone is experiencing zero gravity. She showed how she uses a towel to prevent the water droplets to float around the area. She even displayed what shampoo she used and how to apply it to the hair. The video is so intriguing that it would likely stimulate your interest.

🚿Shower Hour! Astronauts can’t take showers in space or the water would go everywhere, so I thought I would demonstrate how we keep hair clean on the @Space_Station. The simple things we take for granted on Earth are not so simple in micro-gravity! pic.twitter.com/wfXhNv6zzD

The video was uploaded just a few days earlier and since then it has received over 39,000 views and over 1k likes, and it is only rising. It's also gotten a lot of attention from the netizens. One of the users has written, “Living life in a different way”, While another has said, “Great hairstyle @Astro_Megan! Thanks for sharing curious facts about your daily life in #space.” The third said, “Interesting video. I’d never really thought about this.” There are many other reactions like, “Wow”, “interesting” and many more.

Thank you for sharing that. I used no rinse shampoo while my leg was broken and thought I was doing it wrong. Looks like it's actually minimal rinse!

This is worth checking out! I particularly like the styling part at the end https://t.co/9ySWqgNvLz

Wow this was fascinating! https://t.co/IthAYm0UrC

Earlier, Megan McArthur turned 50 on Monday, August 30, 2021, on the International Space Station. Aboard her Twitter account, McArthur released photos from her birthday party on the ISS.

On August 31, 2021, she uploaded three photos of herself dressed in a green t-shirt and khaki jeans, as well as a birthday sachet that reads "Fabulous 50."  She is shown in the photos with a variety of party supplies such as cookies, headbands, balloons, pizzas, and other items. She even described a cake with chocolate candles and ice cream that had not been packaged.

Take a look at the amazing photos:

What a great birthday dinner with my Expedition 65 crew mates! My #SpaceBrothers went all out: quesadillas and tortilla-pizzas with real cheese! Cookie decorating! Cake with chocolate “candles”! We haven’t unpacked the ice cream yet, so I guess that means a 2nd party? 🌮🍕🎂 pic.twitter.com/h0D85fz6ei