The hunter Shane Smith discovered an antique 6,000-year-old arrowhead and plummet in the belly of a 13-foot long alligator. Read to know more 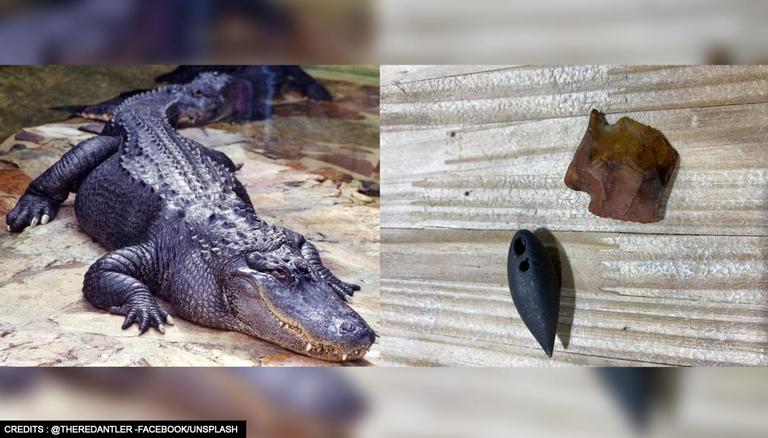 
A hunter was completely flabbergasted after he found a 6,000-year-old artefact inside a 13-foot alligator. Upon dissecting the body of the enormous alligator that weighed nearly 336 kilos, hunter Shane Smith discovered an antique arrowhead and plummet in its belly. John Hamilton, a fellow hunter, had asked Shane to process the alligator. Shane originally assumed the enormous creature had swallowed an arrow that had been fired at it.

According to the Mississippi state geologist, he examined the photographs and determined that the items were between the age of 5,000 and 6,000 years old. Red Antler Processing, which is the processing plant of Shane, described the incident,

“We have been cutting into a few big gators to see what was in their stomach. Everyone so far has had something cool in it. The 13ft 5in gator brought in by John Hamilton today, produced the shock of the year!"

According to historians, Native Americans utilised shattered arrowheads and plummets as fishing weights throughout the Archaic era. Fishbones, feathers, balls of hair, and smelly bile fluids were discovered in the giant creature's stomach.

Shane informed the Mississippi Clarion-Ledger that he initially considered not sharing the incident on Facebook. However, he later realised that the discovery was too amazing not to be shared. He joked that he is probably the only man on Earth who has pulled an arrowhead from an alligator's tummy. Shane believes the alligator consumed the materials to help digestion, as stones may disintegrate hard parts like a bone.

READ | Canada: Woman spots alligator at home and calls up police, later realizes it was a replica

Another alligator incident on social media

A few days back, a woman's fishing excursion turned into a nightmare after a frightening occurrence. In Florida, a woman had a close brush with an alligator. The terrifying video was uploaded on Instagram.

Capecoral.jaden uploaded the video clip on Instagram with the caption, "Florida Everglades never fails to amuse and terrify". In the footage, a woman can be seen fishing when she notices a huge alligator gazing at her. The film begins with a guy attempting to locate an alligator that they had previously spotted. "Where did it go?", the woman can be heard wondering in the footage. However, the woman noticed the alligator slipping out of the water a few seconds later.

READ | Visitors save handler's 'life and limbs' in alligator attack

READ | Alligator clamped in teeth on handler's hand, zoo visitor jumps inside to save her; watch
READ | WATCH: US man wrestles alligator after it grabs handler, people say 'Both are lucky'