Indian Railways has shared stunning videos of snow-covered railway stations on Twitter. The clips have caught the attention of social media users 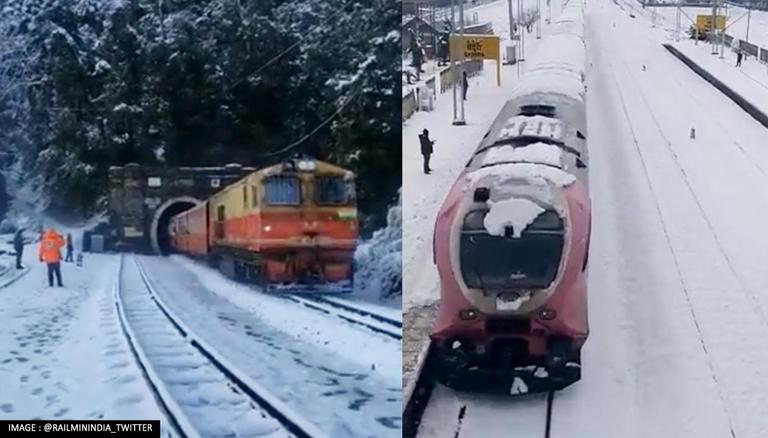 
Northern India is presently experiencing a cold wave and many of the tourist destinations including Kashmir and Himachal Pradesh have received snowfalls. The beautiful views of the snowclad regions are mesmerising to watch. Recently, the Ministry of Railways shared stunning videos of snow-covered railway stations on Twitter. The videos have caught the attention of social media users as everyone is mesmerised by it.

In a separate tweet, the Ministry of Railways has shared a video where a train can be seen passing between Kalka to Shimla. The station in the video can be seen covered in snow. The video shows the special passenger toy train passing through a tunnel near Taradevi Station on the Kalka - Shimla route. The Ministry of Railways highlighted the importance of the location and said that tunnel number 91 is located on the UNESCO-declared heritage Kalka-Shimla route. Watch the video here:

Union Minister of State for Railways Raosaheb Patil Danve has shared a video of Banihal Railway station. In the caption, the Raosaheb Patil Danve informed that the snow cutter is clearing the snow on the station to ensure smooth travel of railway passengers. In the video, the cutter can be seen clearing the snow on the snow-covered station in Jammu and Kashmir. Take a look at the post:

The videos have captured the attention of social media users who could not stop themselves from reacting to the clip. One user commented, "super scenically beautiful run.". Another user commented, "Very nice." Another netizen wrote, "Once in a life time journey."

I want to go there... God place