A photo on Twitter that depicts how brilliantly the preschool students in Venice parked their tricycles in a long line, has won the netizens’ hearts 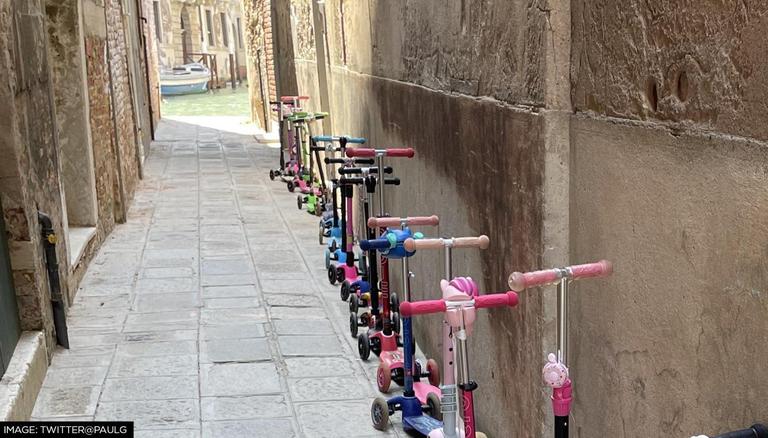 
As the pandemic compelled students to study from home for nearly two years, parents have complained about growing laziness among them. Since countries eased COVID-19 restrictions and with educational institutions reopened, students, as well as parents, are relieved. With the resumption of physical classes, flocks of students can be seen attending lessons in schools all across the globe. Now, a picture of preschool students' tricycles parked in a neat manner on a narrow lane from Italy's Venice has garnered traction on social media as educational institutions braces to welcome a new academic year.

The photo that depicts how brilliantly the preschool students in Venice parked their tricycles in a long line, has won the netizens’ hearts. The photo also shows that red, pink, black, and blue tricycles are parked by the side of a high wall. The image has been shared on Twitter by a computer scientist named Paul Graham, who captioned the image, “Preschool parking, Venice.”

Netizens' reaction to the preschool parking

Since being shared on Twitter, the photo has garnered over 16.2K likes and more than 1440 retweets. The photo has even received adorable comments from netizens lauding the act. Some have even shared images of tricycles parked in the comment section, explaining their lovely experience.

Reacting to the photo, one of the Twitter users wrote, “Oh I so want to give a parking ticket to that red one, the second one from beginning!”, while the other said, “I want to see someone parallel park one of those.” and the third said, “That’s the coolest thing I seen on Twitter all day.” the other comments which were also witnessed are, “Reminds me of the parking garages dedicated to bicycles in the Netherlands.”, “Just imagine the chaos after school!”, “I can hear the scooter noise on that kind of pavement”.

Some have even talked about the brutal school shooting in the United States, saying, “Picture is somehow heartbreaking after what happened last week, despite its unrelated.”