A viral video shows a langur attending class with students and has taken the internet by surprise. The video is believed to be from Jharkhand. 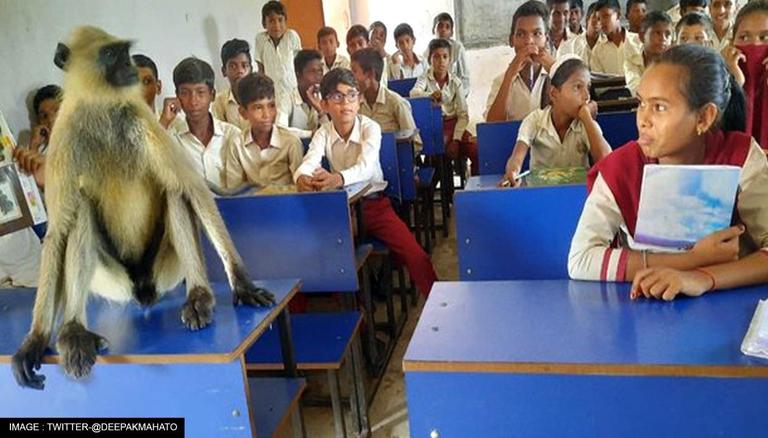 
Langurs are often seen hopping from one tree to another, if not in reality then in viral videos for sure! Another recent clip which has gone viral shows a langur attending classes with students at a government school in Jharkhand. The viral video has gained traction on social media while leaving people amused and shocked.

The video was shared by a Twitter user Deepak Mahato, which shows the langur attending a class with students at a government school in Hazaribagh. The monkey was seen sitting with the students on the carpet in the last row with its back toward the teacher. Uninterrupted by the langur's presence, the teacher continued to teach the students.

Sharing the video, the user wrote, "In #Jharkhand's #Hazaribagh a #wild langoor attends a government school along with other students". Earlier the langur was seen sitting in the front row at the classroom desk! The user captioned the picture and shared it on Twitter, "The new student in the school."

In #Jharkhand's #Hazaribagh a #wild langoor attends a government school along with other students. pic.twitter.com/3ikzQ4Ja5P

The new #student in the #school. pic.twitter.com/Cr0hPwonZK

Meanwhile, as per the media reports, the langur regularly visits the school, however, the animal hasn't hurt or harmed anybody yet. Also, it was reported that the forest department officials chase the langur away from the school but have failed to catch it. The video has garnered several views and has promoted users to express their feelings.

READ | Sanju Samson's reaction after T20 World Cup snub is going viral: 'If I compete with my...'

A user wrote, "Legend says he has cracked NEET and will be joining medical College soon after his Medical and Police clearance". Another user wrote, "Just another day at school".

READ | Smriti Irani on what is 'Death of Democracy': The viral video you must watch today
READ | King Charles III responds to fan asking him out for a beer; old video goes viral; WATCH
First Published: 18th September, 2022 20:46 IST
SUBSCRIBE TO US