A Lion bit a man's finger off as he tried to pet it in Jamaica. The video has been doing the rounds on the internet, and has left people horrified. 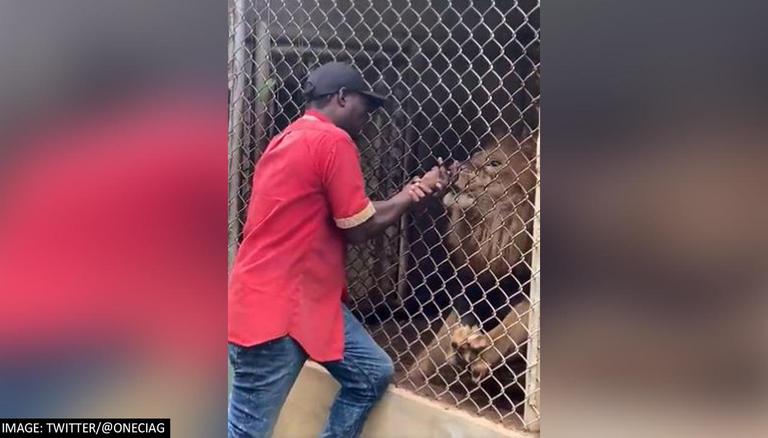 
A lion is considered one of the most powerful animals and is called the 'King of the Jungle.' One does not mess with the 'King' and this was evident in a video, which is going viral on social media.

The video features a man poking his hand through the fence of a lion’s enclosure. The animal wasn’t very pleased and what happened next will surely leave you in shock.

The viral video opens up to show a man teasing a lion and trying to touch it through the fence. In a shocking turn of events, the lion ended up biting the man's finger while the man struggled to break free from its jaws. The man tried to pull his finger out, but he failed as the tendon could be seen falling off the lion's mouth, as he finally managed to break free.

The lion at Jamaica Zoo ripped his finger off. pic.twitter.com/Ae2FRQHunk

The incident took place at a Jamaica Zoo. In a release this afternoon, the zoo, which identified the man bitten by the cage lion as a contractor, called the incident "tragic". They said that his actions were not in keeping with the safety procedures and policies, which they asserted "must be adhered to at all times at Jamaica Zoo". "We are currently reviewing the video, with a view of preventing any future recurrences," Jamaica Zoo said. "It is an unfortunate event that should never have happened, and we, the family of Jamaica Zoo, are doing everything to assist the gentleman in moving forward", it added.

Netizens react to man's fingers being chopped by lion

The video of a lion biting a man's finger has accumulated around 3.9 million views accompanied by several comments. The video has garnered comments, "What gets me is they never stop filming to help! Did they think ripped off fingers as part of the show-off!", a user wrote. The second user wrote, "the man was lucky the lion didn’t pull his arm through the fence". The third user expressed, "Despite the man’s mistakes, these two stood by to film his fingers being chewed. I ask this to the recording persons, how would you like someone filming your demise instead of calling for help. The Zoo should not have visitors get so close to a dangerous animal".

Telling my kids this was Daniel pic.twitter.com/dCXgDNT7Ty

So I decided to slow this down to see if the finger was gone...WTAF pic.twitter.com/iYpRpvEAVc

What gets me is they never stop filming to help! Did they think ripped off fingers was part of the show-off! 🦁👀😳😱😹😹 https://t.co/9dCZwO0eba