Lion King-themed Birthday Cake For 3-year-old Draws Attention For It's 'scene', Check Out

“Not the parents actually doing it. I know kids say weird stuff but this a bit concerning,” a woman said in the comments of the Lion King themed birthday cake. 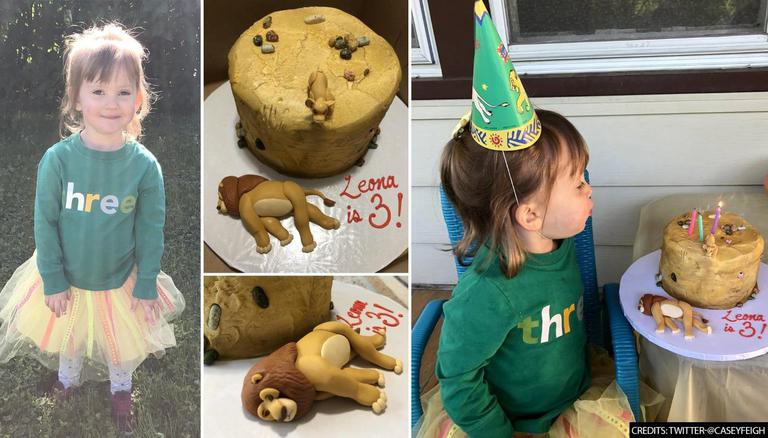 
A three-year-old child named Leona’s ‘Lion King’ themed birthday cake has created a stir online after the cake designated to celebrate a happy moment featured the tragic scene when Simba discovers that his dad Mufasa was pushed off a cliff by his brother and had died. Shared by her uncle on Twitter named Casey Feigh, the post shows several images of the cake that has attracted both frowns as well as astonishment. The child, with an adorable birthday cap, can be seen standing beside the cake that is designed with dead Musafa laying on the base of the creamy cake.

“My niece turned 3 today!!” Casey, Leona’s uncle said in the post. “She asked for a Lion King cake but specifically the moment where Mufasa dies, because ‘everyone will be too sad to eat the cake and it will be all for me,’” he explained. The child had wanted the gloomy scene to be designed on her dessert so that it would hurt the elders to eat her cake. While the kid’s pure innocence had pushed her to get the movie’s heartbreaking scene to have the cake all by herself, the incident did not go down well with many on the internet.

“Not the parents actually doing it. I know kids say weird stuff but this a bit concerning,” a woman said in the comments. Many others, however, shared their kids’ weird birthday cakes as they said that it was normal for children to make bizarre requests. A commenter responded by sharing her daughter’s poop emoticon-themed birthday cake. “Kids are funny!” She said.  Another commenter explained that when their son turned 3, he requested a cake-themed for “the diver man that takes Nemo”. “Three-year-olds are the best,” the amused mom said, adding that her son was thrilled.

“I was 5 when I saw Bambi during the scene where Bambi’s mother died, my mother told me, ‘I want you to watch this, this will be you one day".  My mother died when I was 16.  Even then she knew how I was wired, and was preparing me for what was to come,” one other wrote, suggesting that there was nothing wrong with the realistic scene. “My son wanted a big number 2 on his 3rd birthday cake because that was his favorite Thomas Train,” another said. On either admired the child’s wits saying, “This child is going places in life. That’s some great critical thinking at the age of three.”

I'm surprised they even have a Scar plushy for kids to snuggle with.

Do they also have one of Chernabog from Fantasia? pic.twitter.com/T3zEVhSmxo

Perfection! Reminds me of an installation I did at the Disney Store in Anaheim... pic.twitter.com/g9Vary2L75

This child is going places in life. That’s some great critical thinking at the age of 3

I think it's a bit morbid and self-centered

We played "Lion King" on the slide in preschool, I remember vividly.

Some sort of learning happening here... it's fascinating

My nephew turns 3 today and asked for an animal themed cake / party because he doesn’t like people. Which I mean, is fair. pic.twitter.com/Zpyz6NadLL

They should save money for therapy for her, since they just catered to her.

Her logic is impeccable, but it also reveals her glaring lack of life experience (perfectly normal for a 3 year old)- cake is for ALL moods. The little one is in for a suprise and a life lesson about emotional eating 🤣🤣