The delight of a young girl can be seen upon encountering a 'mermaid' for the first time. Watch this adorable video and know more about the sweet encounter 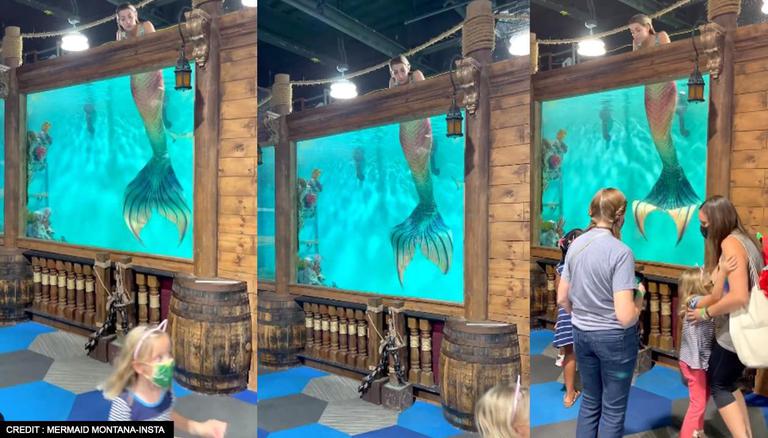 
A very adorable and heart-touching video has resurfaced on the internet where the delight of a young girl can be seen upon seeing a 'mermaid' for the first time. The energy of the little girl is so refreshing that one will want to watch it again and again. This clip has the potential to turn a gloomy day into a happy one.

More about the girl's reaction

The video was posted on Instagram on an account named ‘Mermaid Montana’. The video was uploaded with the caption, “How would you react if you saw a mermaid for the first time? Never forget that there is magic in this world!”

There were several other videos and photos on that account, of performers swimming in the water dressed as legendary marine mystic monsters.

In the video, it can be seen that a girl dressed as a mermaid was floating in a water-filled container. Suddenly, a little girl came running and jumping towards it. She seemed to be so excited that she was dragging her family members to show the beautiful mermaid. At one point she sat on the ground with anticipation. There were other kids around but her joy can clearly be seen in the video.

Take a look at the mermaid video:

Since being posted, the clip has received over 48,000 likes. It has also garnered a lot of positive feedback. One of the Instagram users wrote, “coming up for air 'periodically' love it”, while another commented, “I’d lose my mind! I love mermaids, always wanted to be one”. One other user said, “I love that you are putting huge smiles and laughter on the faces of these kids. Keep it up. Nice”. Another mermaid incident on the internet

A few days back, another funny incident about a mermaid popped up on the internet. During serious flash floods in several regions of Scotland, residents were posting images of submerged cars, delayed transportation, and drowned possessions on social media.

Among those, a Glasgow individual was astonished when he saw a 'mermaid' floating over a flooded street across his home. On closer investigation, he discovered it was a lady dressed up as a mermaid to take advantage of the flooding situation.

I absolutely love my neighbourhood of Battlefield.

Mermaid was out today in the flash floods. Hope those affected by the floods are ok.