Man Gets Too Close To Orangutan At A Zoo, Latter's Actions Leave Netizens Stunned; Watch

The video of an incident has been doing rounds on social media platforms where a man is seen getting too close to an ape's enclosure. Read further. 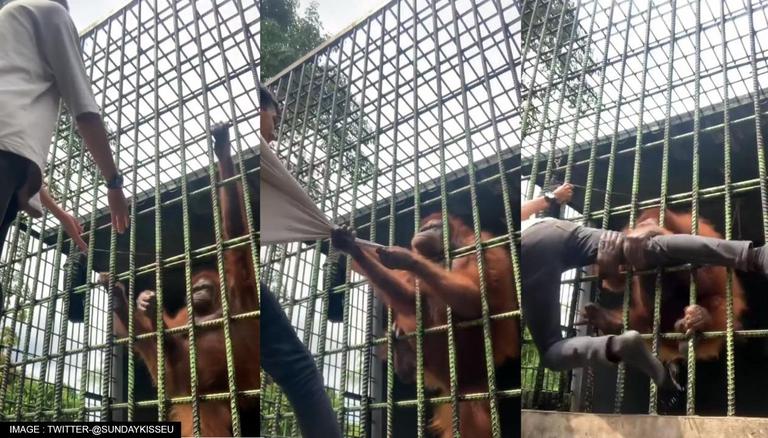 
Visitors to the zoo are always urged to keep a safe distance from the animals and their cages as going closer can prove to be really dangerous sometimes. However, there have been instances when visitors breached the zoo rules and eventually ended up in trouble or getting brutally attacked by animals. The video of one such incident has been doing rounds on social media platforms where a man is seen getting too close to an ape's enclosure. In the 32-second short video, the ape can be seen grabbing the man by his T-shirt.

The video further shows that the man's companion is trying unsuccessfully to pull him free from the orangutan's clutches. Eventually, the giant orangutan grabs the man's leg and drags him back into the enclosure. The man's companion continues to make an effort to free him, but the video ends with the orangutan holding on to his grip and the man dangling from the enclosure at his side.

Notably, Orangutans are extremely powerful apes, with one orangutan being five to seven times stronger than a person. They have the ability to lift up to 226 kg, which is about three times their own body weight.

The video of the incident has gone viral as soon as it was shared on social media on Tuesday. It also garnered a number of reactions from people as they were stunned to see the video. Reacting to the video one of the users wrote, "Why he just didn’t take his shirt off in the beginning? [sic]." "You can tell that’s not even the full strength, just constricted because of the fence [sic]," another user wrote. "He clearly loves his shirt more than his life. It happens sometimes [sic]," expressed a third. "APE POWER [sic]" commented another user.

Here are some reactions by people:

You can tell that’s not even the full strength, just constricted because of the fence

He clearly loves his shirt more than his life. It happens sometimes