Man Orders 'nothing Burger' From McDonald's, Here's What Happened Next

A US-based cartoonist was surprised by what he received after ordering a "nothing burger" from the fast-food chain McDonald's. WATCH 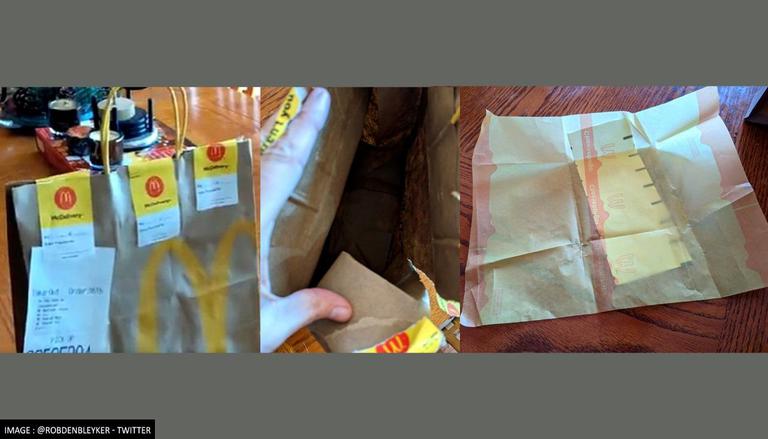 
A US-based cartoonist was surprised by what he received after ordering a "nothing burger" from the fast-food chain McDonald's. Taking to Twitter, Rob DenBleyker posted a picture and revealed that McDonald's had sent an empty wrapper after he placed an order on the food delivery platform Doordash. While ordering the food, he had unticked mustard, ketchup, diced onions, pickles, American cheese, meat, a regular bun, and salt.

DenBleyker also received a query from the DoorDash app, in which the restaurant said it was confused as to what you wanted on your order, but he did not respond to that. Later, he received a brown paper bag that was delivered to him. "They delivered an empty wrapper," he tweeted.

US: Man claim he was 'delivered an empty wrapper' from McDonald's after ordering a 'nothing burger'

OK let's try this again, ordering a nothing burger from McDonalds. this time nothing else in the order.

will they cancel it? deliver an empty bag? i am doing this so you don't have to pic.twitter.com/sYEgA2mqoc

He shared a video of him unpacking the brown bag and revealed that the bag had no burger inside, but just the paper wrapping of the burger. Ever since the video went online, it has amassed more than 1.7 million views on Twitter. "I tipped the dasher $6, so I effectively paid $15 for a lack of cheeseburger," he said in a series of tweets."Capitalism is so wild."

THEY DELIVERED AN EMPTY WRAPPER!!!! pic.twitter.com/hdqGIPd17m

He further wrote, "I've seen like three people complain about me ordering a nothing burger, so lemme clarify: my local McDonald's pays its staff $15/hr. "I am being a job creator."

DenBleyker told Metro that he was pleased with what he received. I was ordering lunch from McDonald's and noticed that inside the DoorDash app, you can remove ingredients from a cheeseburger until there isn't a cheeseburger anymore. "I was curious to see what would happen if I ordered a non-existent burger." He went on to say that he expected McD's to cancel his order or to mistake him for an idiot who doesn't understand delivery apps and send him a regular cheeseburger.

"I was genuinely surprised to not only get a wrapper but a wrapper inside a sealed paper bag! I got exactly what I paid for, which was nothing. I was so happy that everyone involved understood that I wanted nothing, and they delivered nothing. "I was also a little hungry because I didn't order any lunch," he tweeted.