The failed attempts of the Milk Crate Challenge were a huge hit on Twitter, inspiring a slew of memes that went viral. Just check some of the amusing posts. 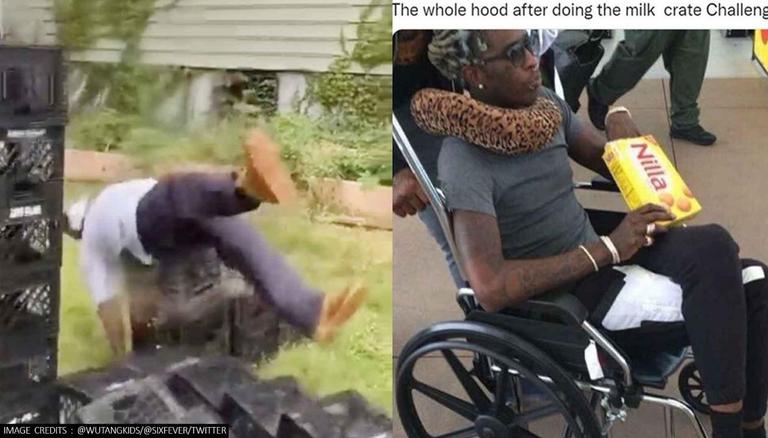 
Each day we witness crazy obsession for various trends in several social media platforms; the Milk Crate Challenge is one of them. It is the newest social media craze that has people hooked to their phones. Arranging multiple milk crates like a stair structure and people attempting to climb to the top is currently making headlines. The challenge includes staking empty milk crates in an up-and-down staircase pattern where maximum crates are placed in the middle. To complete the stunt, one must begin by ascending from the first crate and then descending while balancing the crates. People have been posting their attempts for social media, which is sweeping the internet.

Although that appears to be an easy task, this has proven to be a difficult one. While attempting to succeed in the stunt, several people have fallen from the milk crates and couldn't reach the top. Yet, on the other hand, these failed attempts were a huge hit on Twitter, inspiring a slew of memes that went viral.  The falling of crates clearly resembles the house of cards. It rattles quickly and falls all of a sudden.

My man almost had it pic.twitter.com/aWP1uTebGw

2021 will be defined by the milk crate challenge pic.twitter.com/DQjTrVEQbh

This is by far the WORST milk crate challenge fall I’ve seen by far 🤣 pic.twitter.com/2FcdyLovL7

One of the users has tweeted, “This milk crate challenge seems like the perfect time to come back to the conversation on universal healthcare.”

Well, it is quite visible about the condition of the participants who unfortunately failed due to falling miserably from the crates. Many individuals all around social media expressed their concerns about the potential for harm of the challenge. Several memes have been created and were posted by the users on Twitter.

Everyone after doing the milk crate challenge pic.twitter.com/gyE7l70CBL

Them insurance companies watching y’all do the milk crate challenge like- pic.twitter.com/cOcVxLTSde

Healthcare professionals when they gotta deal with COVID patients and the milk crate challenge pic.twitter.com/vaKEck3X0a

The whole hood after doing the milk crate Challenge pic.twitter.com/0C5gqlHtjt

The hood when they bored in them wheelchairs 😂 pic.twitter.com/b0KOwxpfT7

Apart from all the failing videos we have seen so far, few people aced this challenge like a pro. There is a video of a girl who completed this challenge while wearing a pair of heels; balancing on the empty crate is itself a challenge, and she has taken it to another level. Let's witness some of the victories.

Yet, recently another video has resurfaced, posted on Sunday by a multimedia production company Sir Veillance Studios, on Twitter, showing that a man is participating in the Milk Crate Challenge. It is seen that the man is attempting to climb and descend the crate staircase while allegedly rolling a cannabis joint without falling. This particular video received more than 5 million views.

READ | Rubina Dilaik asks 'What is Pawri?' as buddy Srishty Rode films viral meme with her

A man by the name of White Mike has set a new world record, being the 1st person to complete the Milk Crate Challenge while rolling a blunt🤯🥇 pic.twitter.com/V4RdzAWRhd

READ | Dua Lipa explains how her viral meme pushed her to prove herself
READ | Watch: Video of 'Milk Crate Challenge' of a man garners over 5 million views