In the viral video, a monkey is seen hoisting the Tricolour flag on Independence Day. Watch the video here. 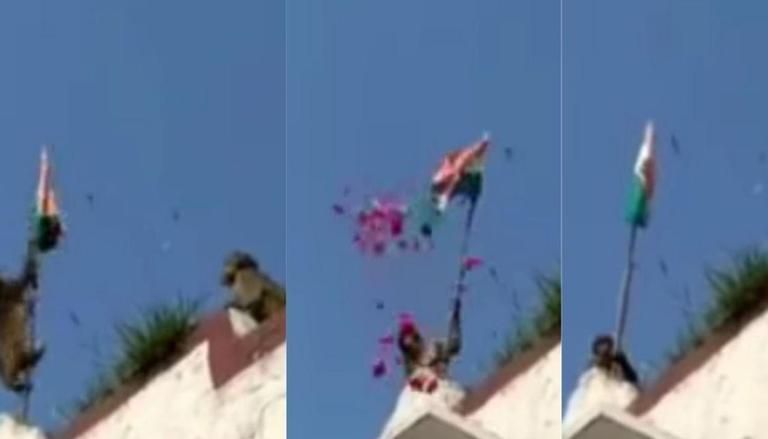 
A monkey was seen hoisting the Tricolour flag on India's Independence Day. The hilarious video is widely sharing on all social media platforms and has taken the internet by storm. People are amused by seeing a monkey hosting the national flag placed on a school building. Even more amusing in the video is the scene where another monkey is seen silently looking at his companion while he is conducting his patriotic task. The video clip was first shared on Instagram by a meme page named Giedde.

Two monkeys are seen on the top of a school building, where the national flag is placed in the viral video. The monkey first tries to hoist the flag by shaking it, and when he fails, he figures out another technique and pulls the string of the flag, and flowers start raining from it, leaving the flag flying high. Meanwhile, another monkey imitates humans; he remains still and quiet when the leader hoists the flag. Moreover, people are heard cheerfully clapping for the money in the background as he hoists the flag. The video has garnered over 18,000 views since it first went online and has sparked hilarious reactions from netizens. After watching the video, one user wrote, "Taali bajni rehni chahiye," (clapping should not stop).

Here's the video that captivated the attention of many:

Here are some hilarious reactions from netizens on Instagram

A user took to the comment section and wrote a sarcastic note as he said, "Neta kya Janay adrak ka swad". A third person who saw the post said, "Wonderful, surprising, cheering, and unique video." Meanwhile, the fourth user who saw the video commented, "Bandar proved himself-"I am smarter than India ke kuch neta and Pakistan". Another user who saw the post expressed his honest opinion and said, "In fact, the guys who hoisted the flag seem to have run away without unfurling it, on seeing the monkeys. The monkeys were looking for some eatables. To hide their blunders, they are making hype". "Hanuman Ji" said another user.

READ | Man wins Rs 40 crores in lawsuit after claiming it was bartender's fault he got drunk
READ | Gujarat woman beaten for talking to members of rival family in Dahod; accused arrested
READ | Snowflake 'Karen' lashes out at organisers after consuming too much dairy at wedding