Named as Sinomacrops bondei, the species is the third anurognathid species to have been described from Jurassic-aged rocks which were discovered in China.


Researchers have discovered a new species of anurognathid pterosaur from the Tiaojishan Formation in Hebei Province, China. Named as Sinomacrops bondei, the species is the third anurognathid species to have been described from Jurassic-aged rocks which were discovered in China. According to the reports by Everything Dinosaur, the specimen is badly crushed and it represents an almost complete skeleton of a single individual. It can be used in helping palaeontologists to understand the phylogeny of these pterosaurs in a better manner.

Pterosaurs are mostly a diverse order of prehistoric flying reptiles and is drawing comparisons to the adorable Porgs from Star Wars: The Last Jedi. Also, these are known as the earliest vertebrates which have the ability to fly. All the anurognathids described till date are estimated to have had wingspans, which is usually less than 90 cm. The fossils of these species are associated with terrestrial environments. Also, it has been suggested that these little flying reptiles lived in forests and ate insects, which were captured using the wings.

The paleontologist have for a long time speculated where does the Anurognathidae fit in the reptile family. There have been very few fossils which are known. Also, these have been made available to study and demonstrate a mix of basal. All the anurognathids described are estimated to have had wingspans which are less than 90 cm. Also, their fossils are associated with terrestrial environments. This is the first record of an anurognathid pterosaur skull which has been preserved in a lateral view. “.The species epithet honours the Danish palaeontologist Niels Bonde in recognition of his many years contributing to vertebrate palaeontology”, read the blog.

READ | Mars had drier and wetter eras before drying up completely 3 billion years ago: Study 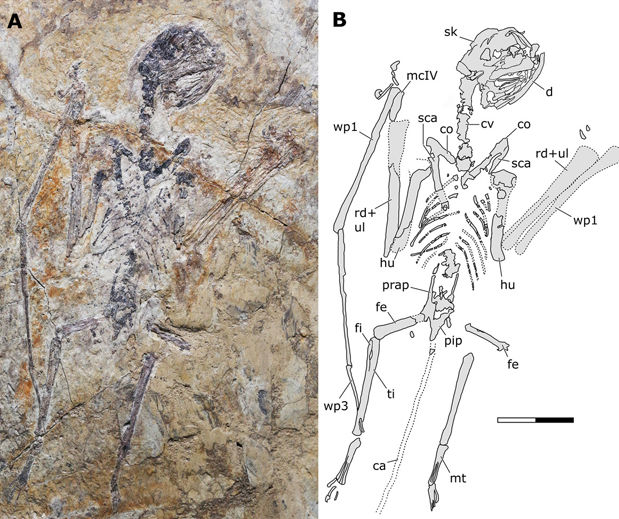 The discovered skeleton is badly crushed. However, the fossilised remains which come from the Daohugou Beds of the Tiaojishan Formation are between 164 – 158 million years old. Also, these remains have provided a new insight into the variation of jaw shape in the species.

‘One who causes fear’

Ealier, the scientists in Argentina discovered the well-preserved skull of a large meat-eating dinosaur named ‘one who causes fear’ in the local Mapuche language. According to the study published in the Journal of Vertebrate Paleontology, the horned ‘Llukalkan aliocranianus’ was around 5 metres long and roamed South America 85 million years ago. Researchers discovered the remains nearby of another carnivorous dinosaur, something they said was highly unusual.

As per the study, similar to T-rex, the Llukalkan dinosaur was also two-legged with very short arms but was medium-sized compared to the giant T-rex. The dinosaur had short horns and tiny fingers. It was estimated to weigh between one and five tonnes, which is slightly lighter than an adult African elephant.