As students get ready to go to school after a long time, netizens could not stop imagining hilarious situations and flooded social media with memes. Check here 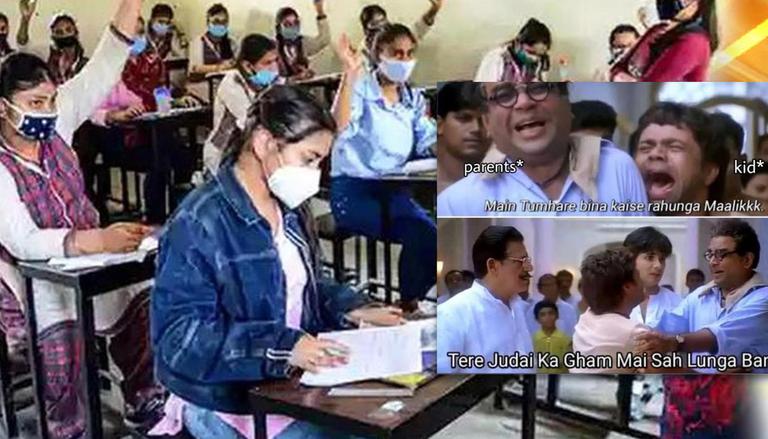 
After more than one-and-half-year, schools have finally reopened in many states on Wednesday. As COVID-19 cases significantly dropped in India, several states, including Uttar Pradesh, Rajasthan, Tamil Nadu, Telangana, Madhya Pradesh and National Capital - Delhi reopened doors to schools with COVID-19 protocols in place. Amid fear of the third wave, state governments and school administrations have enforced strict rules and regulations to ensure the safety of the students. However, as students were set to go to school after a long time, netizens could not stop imagining hilarious situations. They proved once again that in the era of social media, one could never predict what might start trending or become the next big meme.

From children throwing tantrums for waking up early to parents' happiness of kids going off to school to teachers having tough times in maintaining social distance, the internet was abuzz with hilarious memes. We collected some of the best '#SchoolReopen' memes that are just too funny. Imagining the reactions of a few "frustrated" parents, one of the users wrote, "Akhir wo din aa hi gya [Afterall that day has arrived][sic]". Sharing an image from the Bollywood movie Ghajini, one user wrote, "Schools are reopening meanwhile me who don't even remember in which class I was not the route to school[sic]". While imagining the reaction of some students, another user shared the lyrics of the famous song Channa Mereya and wrote, "acha chalta hoon...duaaon me yaad rakhna[sic]".

Schools are opening after 18 months#SchoolsReopen

Schools,colleges Reopen all over india.
Teacher waiting for the student who misbehave during online class pic.twitter.com/Akv5WTr8wM

Me telling my mom why I should not go school on first day#BacktoSchool2021 pic.twitter.com/hxBMMxmzyA

CBSE shared a meme before announcing board exams' result

It's worth mentioning that in July similar kind of meme fest was on when the Central Board of Secondary Education (CBSE) had shared memes before announcing the board results. The CBSE had shared the meme on its Twitter handle. The graphic was related to Amazon Prime Video's thriller series named The Family Man. In the meme shared, actor Manoj Bajpayee is asking Uday Mahesh (Chellam Sir), “When will CBSE results be declared?" Chellam Sir asks Tiwari not to be a “minimum parent” and be positive about the results as they will be out soon. The caption on the tweet reads, "Don't be a Minimum G̶u̶y̶ Parent. #StayCalm #StayHopeful #CBSEResults #CBSE".

WE RECOMMEND
When will colleges, schools reopen in India? Here's a state-wise update on reopening news
When will school reopen in India? Here is an area-wise detail
Schools in India might reopen after August 15 following strict social distancing; read
Gujarat to open schools for Class 9-12 from July 26 amid COVID-19
Andhra Pradesh to re-open schools from August 16; board results to be declared by July end