Sasmite Gochhait, and her husband Akil Munda rescued the giant reptile in Odisha after they noticed that their  2-year-old child had crawled near the snake. 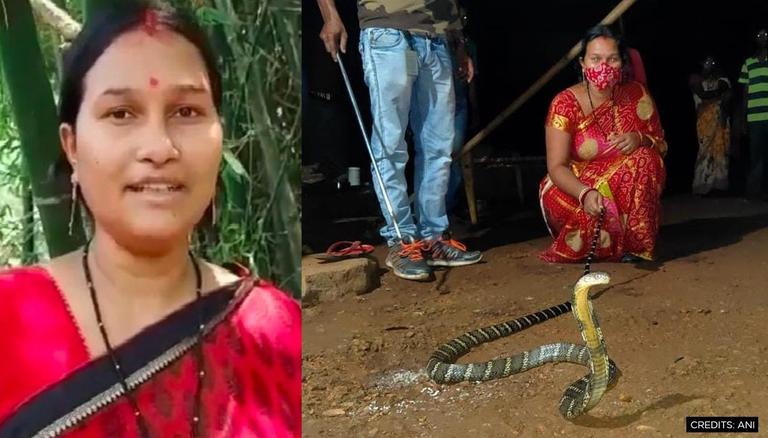 
A woman in Odisha's Mayurbhanj rescued an 8-foot long king cobra from near her home’s vicinity on Saturday, stunning the neighbourhood. Sasmite Gochhait, and her husband Akil Munda rescued the giant reptile after they noticed that their  2-year-old child had crawled near the snake. The father of the toddler managed to grab his son away from the snake and jump out the window. The woman, meanwhile, claims that she had never touched a snake prior to the incident but managed to catch the reptile, according to ANI.

"As soon as I saw my baby crawl towards the cobra I grabbed him and jumped out the window to call officials. We went to call range officer Krishna Gochhait and told him about the incident. He rushed home with me," the father of the child, Akil Munda told ANI.

The ANI news agency shared the photographs of the harrowing incident on its official twitter handle where the woman who caught the king cobra in order to save the child was seen sitting in from of it. The green and yellow textured reptile was slithering on the mud in the couple’s home as can be seen in the images. "I and my husband rushed to the village. It was the first time I have caught the King cobra inside a house. We released it in its habitat. I am very thankful to the forest department and range officer who helped us in this situation," Sasmita told ANI.

Odisha: A woman rescued a King Cobra who entered a residential area in Mayurbhanj

"It was found in front of a house of a local. I rescued it and released it in its habitat with the help of the forest department and Range Officer," said Sasmita Gochhait (05.06) pic.twitter.com/dCfsaAkrSs

It's a King Cobra...not just cobra.
Rare snake which eats other cobras.

A couple of days ago similarly a woman in Vietnam was seen catching a huge snake with bare hands and walking away with it. In footage that surfaced online, she stunned the passersby as she subdued the reptile while it kept slithering. The video was captured by onlookers and shared by a page ViralHog on YouTube. The video shows a woman wearing a mask trying to get hold of a snake as it coils itself around her waist and shoulders. She later walks away casually with it.

"See, I love snakes and I want to do this. I just kinda don’t have enough courage to do it yet. Yea last time I saw a black rat snake in my grandparent's yard I backed out and it ended up getting through a crack. I accepted my loss in the end don’t worry,’ a user said. Others were left equally stunned at how valiant the woman was.