A new video has surfaced on the internet which shows a dog playing a game involving his treats. The video has caught the attention of netizens. 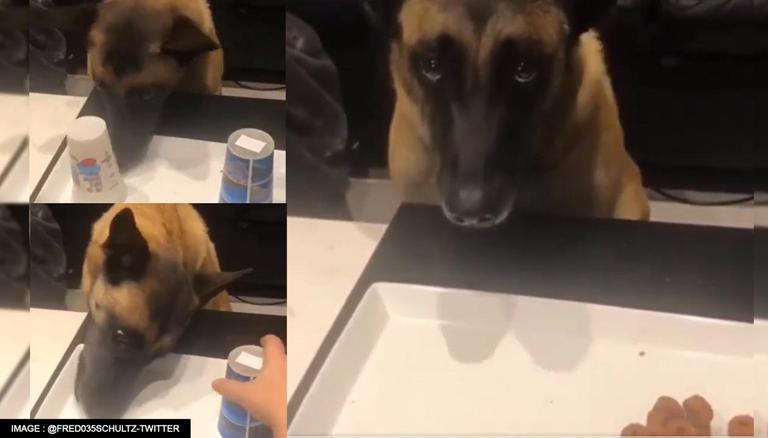 
Internet is filled with plenty of dog videos that capture their cute antics. Continuing with the trend, a new video has surfaced on social media which shows a dog playing a game involving his treats hidden under the glass. The sad reaction of the dog following the game's result has grabbed the attention of netizens.

The video has been shared by a user who goes by the name @fred035schultz on Twitter. The caption of the video read, "You're kidding....right?"

In the video, a person can be seen moving two glasses placed upside down on a table, one of them containing more treats for the dog. As the video proceeds, the dog tries to choose between the two glasses. The dog can be seen making his choice between the two glasses, however, he chooses the glass with a small treat. The dog noticed the bigger treat hiding under the other glass. The video ends with the cute reaction of the dog who lost his treats. Watch the video here:

The post, since being shared on Instagram, has garnered over 3670 likes and several reactions. The video has caught the attention of social media users, who reacted to the clip. One user commented, "Ah the poor lad...."

Another user commented, "Dogs are just the best". One other individual commented, "My dog would not care. She would just eat the pile with more food Rolling on the floor (and come back for the 1)." Check out some user reactions:

Awww such a smart dog. I hope the pup ended up being getting the big treat pile too😊

Omg this is funny. The look.

Such sad 👀 I hope he got the big stack too 🤞

My dog would not care. She would just eat the pile with more food 🤣😂 (and come back for the 1) 😀🤙

Dogs are just the best 🥰

The hilarious clip further shows Barley holding onto Fluffy and not letting it go when its human friend tries to take it away. The short video clip was shared on the Instagram page named 'barleyboy.'

"It’s my fluffy, not your fluffy," read the caption of the video, along with hashtags #OneOfHisNewGames and #FluffyInTheMiddle. Take a look at the post: