The viral video opens with a beggar spotting the car of a man, who is shooting the clip, at a traffic signal. The video has gained traction online. 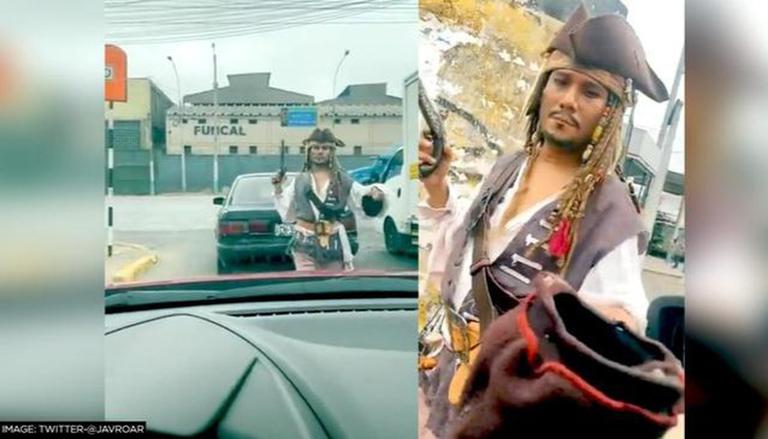 
There is never a lack of engaging videos on the internet, and these range from inspirational to humorous ones and even include bizarre acts. A video of a beggar donning Captain Jack Sparrow's outfit has been doing the rounds online and is now gaining traction on the internet. The man could be seen imitating the mannerisms of actor Johnny Depp. Specifically, the man imitated Johnny Depp's Jack Sparrow character from the Pirates of the Caribbean film series. He is seen asking for money, and even carrying a toy gun to complete the look.

The viral video opens with a beggar spotting the car of a man, who is shooting the clip, at a traffic signal. The beggar takes out his toy gun and starts walking towards the car. As he reaches the window of the car, he is seen taking out his hat to collect money from the man. After collecting the money, he gives a Jack Sparrow-like smile and walks away. The location where the video has been shot is not known. Sharing the video, a Twitter user wrote, "This was the most creative way of begging I've ever seen."

This was the most creative way of begging ive ever seen 😭🤣🤣☠️🏴‍☠️
pic.twitter.com/hUHFYjGimC

Netizens say, 'For real! I was like damn he’s good'

The trending video has grabbed the attention of many and has garnered around 8.2 million views. The beggar's approach has also left Twitter users amused and taken back. "He woulda got my whole wallet," a user wrote. A second user expressed, "If you don’t give him money he pops you with the glock-hamilton and steals yo money." A third one wrote, "Oscar-worthy performance>begging." One user even wrote ''That's Johnny Debt.'' Take a look at the some of the reactions below.

he woulda got my whole wallet

if i ever need money imma try the Jack Sparrow Method pic.twitter.com/9CSZE38yME

i woulda gave bro $100 just for the effort