A university graduate in Phillippines was left sobbing at his graduation ceremony after he realized his parents were not present to witness the biggest day. 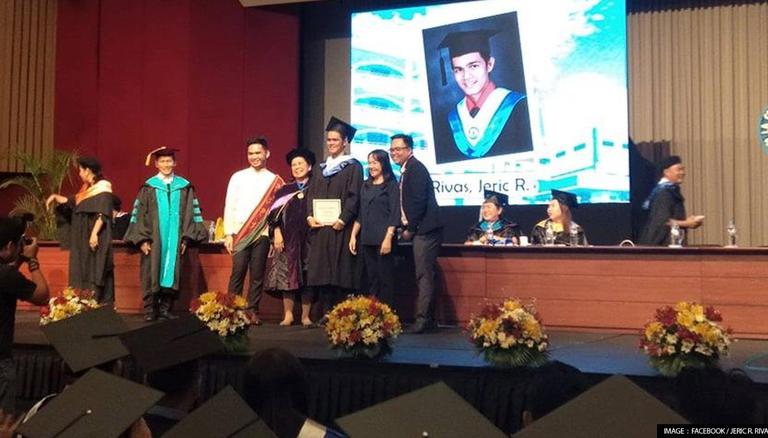 
Graduation can be counted among the most special and memorable events in a person's life. The event is a reason of joy for both the student as well as his family as the former enters a new phase of responsibilities in his life. The event becomes all the more beautiful when the family are in attendance to support their son/daughter on their special day. However, a university graduate in Phillippines left his graduation ceremony sobbing after he realized his parents were not present to witness one of the most significant events of his life.

The post was shared by Jeric Rivas, who graduated as the top student in his class at La Concepcion College in San Jose Del Monte Bulacan in the Phillippines. His celebration was, however, tinged with sadness as his parents didn't arrive to witness the ceremony. Jeric shared the post back in 2019, however, it resurfaced on the internet recently and has been running viral. Sharing the post, Jeric Rivas explained that he was hoping his parents would show up to his graduation, despite having been let down by them on previous occasions in the past.

Furthermore, Jeric claimed that when he was a child, he received a medal at school for earning top honors in his class, however, because his parents didn't show up to support him, he never even bothered to go up on stage and accept his award. But, at his graduation ceremony, he said he tried to walk confidently when his name was called up on stage, but ended up breaking down in tears as he realized his parents hadn't shown up.

Sharing the post Jeric wrote in Filipino, "I felt a mixture of happiness and sadness again. I looked to the right, looked to the left, and at the back and in front, all I saw were happy faces that are smiling". He added, "I'm trying to hold back from crying, but I just can't. I just felt my tears falling, I just sat beside. I felt envy". The student was supported by his professors and even one of them accompanied him on stage to be with him when he received his scroll.

As the post resurfaced on the internet, netizens came up in support of the man. Many people were expressing their views, "You are truly special. May you be supported and nurtured by the Universe and God. You are loved by so many", a user expressed. The second user wrote, "though father and mother will fail . God will lift you up. Jesus knew you before you were conceived/ wor of god". The third user wrote, "Thanks Jeric for your hard work, you have an incredible spirit. We all support you on your journey of life. For it says: "If your parents forsake you, God will take you up".

WE RECOMMEND
Fact Check: Are protests being conducted in the Philippines due to the COVID-19 lockdown?
When BTS' Jimin kicked V out of room after latter saw nightmare; here's what happened next
Dennis Rodman's father had 29 children with 16 mothers and met NBA star only once: Report
Philippines: 8 killed as plane carrying medical crew, patient crashes at Manila airport
DRDO avers India's defence exports to surge as BrahMos missiles impressed many nations