A picture of a king cobra swallowing another cobra gained traction on social media. Users were left in awe with the picture, because both photography and facts. 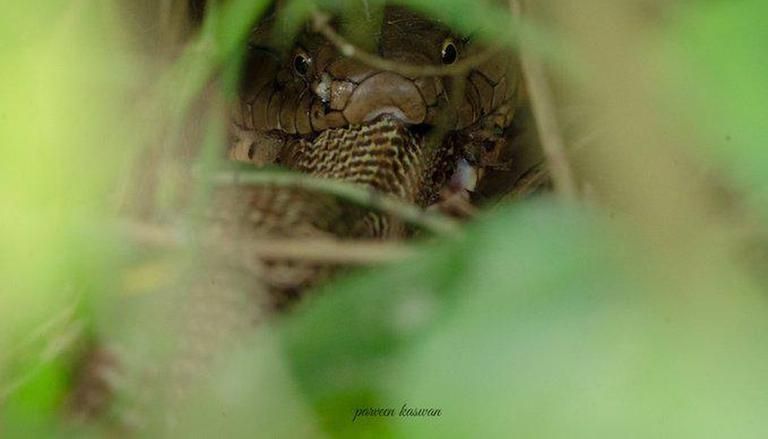 
A picture of a snake eating another snake went viral when it was shared by IFS Parveen Kaswan on July 19 on his Twitter account. The picture was of a King Cobra feasting on another species of cobra called Spectacled Cobra. Along with the photograph, Mr. Kaswan shared some particulars of the species within the caption, “Ophiophagus hannah. A king cobra eating a spectacled cobra. They feed on lesser mortals.” In anther tweet after the original tweet, he added, “The scientific name of this king cobra is Ophiophagus hannah.” Then he went on to explain the origin of the nomenclature and tweeted, 'Ophiophagus' is derived from Greek, which means 'snake-eating' and Hannah is derived from the title of tree-dwelling nymphs in Greek mythology. So, the king living true to its title.”

The magnificent photo clicked by Mr. Kaswan himself quickly gained a lot of attention on social media. Many said that this was the IFS officer's best click. Many users praised him for the excellent timing of the shot. It was amazing to see how many people were never aware that cobras eat other snakes as well.

The scientific name of this king cobra is; Ophiophagus hannah. “Ophiophagus” is derived from Greek, meaning “snake-eating” and hannah is derived from the name of tree-dwelling nymphs in Greek mythology. So king living true to its name.

The only snake which build nests.

Mr. Kaswan also provided some trivia and said that King Cobra is the only snake that builds nests. The picture of the snake and the strong glare from its eyes made many social media users reply to the tweet in awe. One person replied saying, “He looked happy, though.” Mr. Kaswan replied to the comment with additional information saying, “King cobras are foodies when it comes to other snakes. Rat snakes are their favourite. They swallow big rat snakes as they are. The rat snakes fit in their body and they live happily ever after.”

Netizen's response to the picture

One person responded by saying how smart a King Cobra is:

Another user showed his astonishment about this fact: