While many people may not agree with the poll results, it is worth noting that Prince William was once considered the world's most eligible bachelor.

Prince William, the Duke of Cambridge has been named the world’s sexiest bald man by surgical group Longevita. According to The Sun, cosmetic surgery specialists Longevita analysed Google search results and found Prince William and the word ‘sexy’ have been mentioned over 17 million times online, including in blogs, articles, reports, etc. Boxing legend Mike Tyson with 8.8 million results and Transporter actor Jason Statham with 7.4 million results grabbed the second and third spot respectively.

The poll did not go down well with netizens, who immediately started flooding the Twitter timeline with their personal preferences. Several users backed Transformers actor Stanley Tucci Jr, accusing the poll of being biased towards the Royal Family. Some suggested the poll to be a PR stunt supposedly to correct the recently tarnished image of the Royal Family, which faced a lot of criticism after Meghan Markle’s explosive tell-all interview, where she accused Buckingham Palace of racism. Hollywood actor Dwayne Johnson aka The Rock also tweeted the results with a hashtag #demandingrecount. 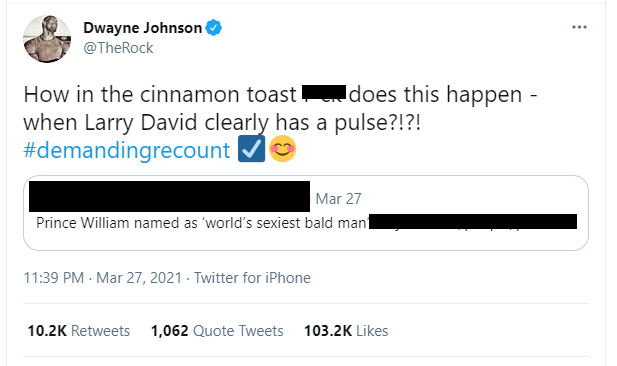 This is why Prince William rigged that poll. You can’t tell me any differently. pic.twitter.com/TWiswhabm1

Bald men who are sexier than Prince William pic.twitter.com/FAscqpmvJi

Prince William being named sexiest bald man in the world raises some questions for me. Like which world? Where did the other men go? Why are they not there? Is it even safe to be there? Could u define “world”? Did you mean “castle”? Define “sexy” and “-iest”? Use both in a sente—

Prince William named as the ‘sexiest bald man’… probably on another planet. pic.twitter.com/kWEjGchuDC

I’d go to Italy with Stanley Tucci and drink many Negronis with him, talk food, books, art and wine... and he has impeccable style and he cooks. Now that’s sexy. Prince William is so far from sexy even gps can’t help him get there. pic.twitter.com/9tm6Sb04oF

Putin misses top 10 by a spot

While many people may not agree with the poll results, it is worth noting that Prince William was once considered the world's most eligible bachelor and was a major heartthrob. Prince William, who is second-in-line to the throne, has served in the British Armed Forces as Flight Lieutenant before joining the RAF's Search and Rescue Force. Prince William is married to Kate Middleton and has three children, two boys, and a girl.