While taking to Twitter, Punjab CM informed that he has directed the Deputy Commissioner of Ludhiana to ensure that Vansh, a class II drop out, rejoins school. 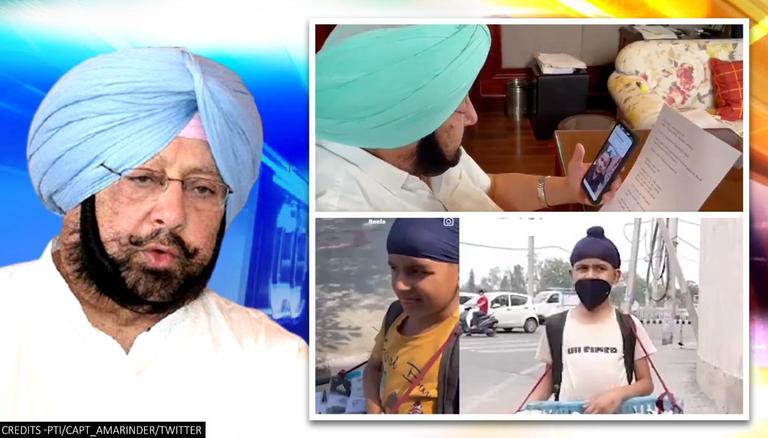 
After a footage featuring a 10-year-old boy, Vansh Singh, selling socks on roads in Ludhiana went viral on the internet, Punjab Chief Minister Captain Amarinder Singh made a video call to the child and announced assistance of Rs 2 lakh for his family. While taking to Twitter, the Chief Minister also informed that he has directed the Deputy Commissioner of Ludhiana district to ensure that Vansh, a class II drop-out, rejoins schools.

In the video call, Singh said, “I will inform the Deputy Commissioner to get you enrolled in the same school where you were studying earlier….I will help your family…Study well and become a big person in the future”.

Spoke on phone to young Vansh Singh, aged 10, a Class II dropout who’s video I saw selling socks at traffic crossing in Ludhiana. Have asked the DC to ensure he rejoins his school. Also announced an immediate financial assistance of Rs 2 lakhs to his family. pic.twitter.com/pnTdnftCDo

The Punjab CM spoke to Vansh after seeing his video of refusing a car occupant’s offer of Rs 50 extra, over and above the cost of socks. Singh said that he was impressed by the boy’s self-esteem and dignity. Vansh’s video had taken the internet by storm and had captured millions of views on the internet, with netizens lauding his honesty.

READ | COVID: Amarinder against lockdown, says situation expected to get worse in Punjab

According to ANI, Vansh’s father, Paramjit, is a socks seller and his mother Rani, a homemaker. The 10-year-old has three sisters and an elder brother, and the family lives in a rented accommodation in the Haibowal locality in Ludhiana. Vansh said that he had quit school due to the financial situation at home and he further expressed his desire to rejoin.

Meanwhile, ever since the Punjab CM announced assistance, several internet users lauded Singh for his “great philanthropy work”. One user wrote, “What a super human being @capt_amarinder is. May Wahe Guruji bless him with a very long, happy and healthy life . This is how a true leader wins not only hearts but immense respect too”. Another added, “Commendable job done sir, respect for you from the bottom of heart. We need more leaders like you who feel the pain, crisis of underprivileged people. Salute from my side and on behalf of my father and grandfather being retired army personnel .jai hind”.

Capt Makes every Congressman proud by his actions 👍

This gesture is highly appreciated !
Do make sure that no kid in Panjab undergoes such hurdles !

Love and salute to you and also the kid who took to selling socks and not chose to become.....

What a super human being @capt_amarinder is. May Wahe Guruji bless him with a very long, happy and healthy life . This is how a true leader wins not only hearts but immense respect too. @ShikhaTOI @thetribunechd . Other netas have a lot much to learn from him.

A heartfelt thanks @capt_amarinder from everyone. What is needed is a purpose driven system that allows for sustainability...