A Dublin-based restaurant employee who opted to leave the company was paid his salary in a bucket full of 5 cent coins. See how netizens reacted to his post 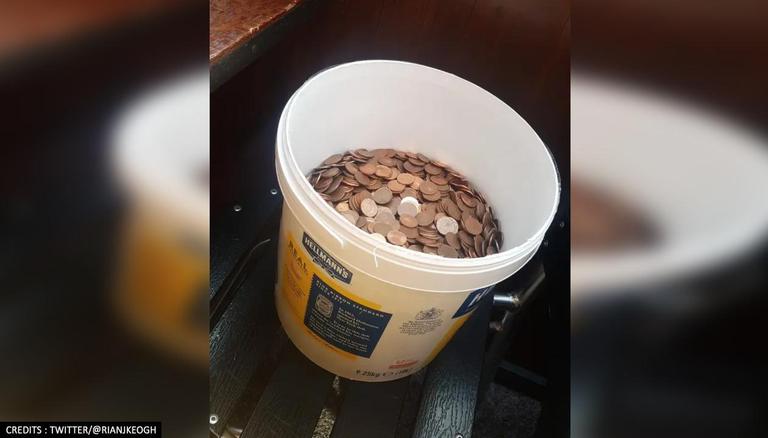 
A Dublin-based restaurant employee who had been chasing his final salary for weeks was given the complete sum in 5 cent coins. The employee, Rian Keoghhad, opted to leave his company. However, his ordeal began as soon as he submitted his documents.

Keogh had to chase down the final payment for quite some time. When he eventually got it, he discovered that the entire settlement money had been paid in 5 cent coins. Keogh posted a photo of a pail of mayonnaise filled with 5 cent coins on his Twitter handle. A later photo in the thread revealed that the bucket weighed an astounding 29.8kg.

If anyone wants to know what it was like to work in alfies on south william street just know after chasing my last pay for weeks I finally got it but in a bucket of 5c coins. pic.twitter.com/otKhikIU5q

Later tweets from Keogh included screenshots of a WhatsApp chat he claims he had with his former employer, writing: "The messages have been updated to hide the phone number. Also, the Hellman's jokes never get old; each one still makes you laugh. Thank you for your support."

Keogh explained in his first post that he had not yet gotten his 'back week of pay,' and that he needed it 'asap' to cover college expenses.

Update here are the texts just hid the number. Also the hellmans jokes arent getting old each one still gets a chuckle . Cheers for the support pic.twitter.com/JaO5NZAM6V

On September 4, a message on the chat shared by Keogh stated that the money would be ready the following Thursday, but when he followed up, he received the response: "Is it all right if I pay you in cash on Tuesday? I didn't save your banking information, so is cash acceptable, bro?"

Cash would be "great," but Keogh said he needed it 'as quickly as possible. "Like I said, I'll have every cent ready for you on Tuesday," one respondent stated, before adding the next day, "Money is at the front door ready for you now."

The 'disgraceful behaviour' shocked a lot of other Twitter users. One person wrote: "Anybody attending @alfiesdublin should pay for their drinks in coins like this going forward."

Another user commented, "Everyone should book a table there and cancel it at the last minute and say the reason is because of the disgusting treatment of this young man Rian. I’m first to do it and before the do-gooders start the only way to treat contempt is to react."

A third user commented: "This is a pretty common joke in the restaurant industry. You'd have been paid in notes if you didn't bring the coins home you mug."

READ | Child does homework on scooty's backseat as mother takes him to school; Watch viral video

Others encouraged Keogh and his companions to return to the restaurant and settle their bills in coins.