Union Minister Smriti Irani is known for delighting her social media followers with quirky and humorous posts. From sharing her playlists to ranting about her early morning struggles, the Bharatiya Janata Party (BJP) leader makes sure to share a snippet from her everyday life. Going on the same lines, she recently took to Instagram to share some “gyaan from Google Baba”.

Using #HappySunday, the 44-year-old lawmaker, shared a smiling and vibrant photograph. In the caption, she advised followers to "keep smiling" to ward off problems. "Keep smiling & one day life will get tired of upsetting you ... Gyan from Google baba," she posted. In the picture, Irani could be seen donning a saree with floral print and holding a water bottle. She could be seen smiling and in a jubilant mood, symbolically echoing her caption.

Since shared, the story has captured reactions from over 45 thousand people and attracted a wide range of comments from people. While many have thanked the leader for sharing the "positive message", others have remarked on her outfit. Yet there were many others who requested Irani to refrain from promoting single use plastic. "Looking superb," a user wrote. "Respected mam, being a public figure, you shouldn't promote single-use plastic. A humble request from an admirer," another added. "happy Sunday..," added a third. 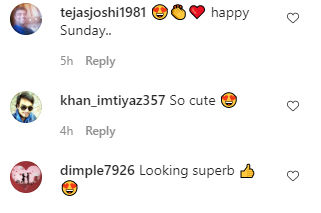 Last week, Irani took to Instagram to share a picture of her doing her “homework.” The photo which made its way to Irani’s feed shows her sitting inside what seems like a plane on a runway while jotting something down on a piece of paper. Donning a pink and red saree, Irani could be seen holding a piece of paper while concentrating on writing. “Kaun kehta hai homework sirf school mein hota hai,” she quipped in the caption.In her witty caption, Irani jokingly whined about studying for almost half of her life. “Padhti ka naam pyari .. isi mein chali gayi aadhi umr humari Btw aadhi ka matlab not 50 yet .”, she wrote.